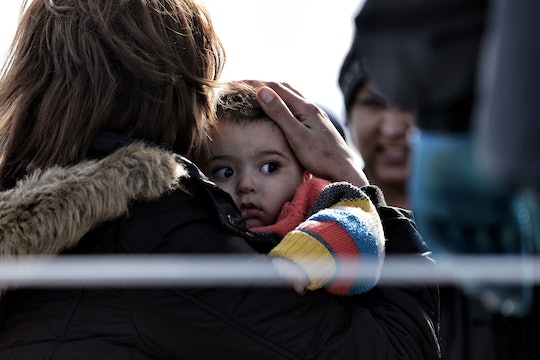 Presidential elect Donald Trump scares immigrants and people of color for many well-documented reasons. He has famously pledged to "build a wall" to keep Mexican immigrants out of the United States. He's hinted at the possibility of forcing all Muslims to register for a mandatory database, and he has frequently threatened to close America’s doors to Syrian and Libyan refugees. Under President-elect Trump, many refugees in the United States fear deportation, and the millions still displaced hardly stand a chance of relocating to our country.

Nearly 65 million people worldwide have fled their countries in search of asylum, according to data from the United Nations. Mothers and mothers-to-be in particular make up a sizable percentage of the general refugee population: nearly half of all refugees are women, and one in 10 of these women is pregnant.

To find out what it's like to be a refugee mother and the myriad challenges these women face, Romper spoke with organizations leading the way in protecting and empowering refugee children and women, as well as refugee mothers who expressed their dismay at the outcome of the election.

The Largest Challenges For Refugee Moms

Female refugees face a heightened risk of sexual assault and unintended pregnancy as their country's support systems, from health care to police forces, collapse around them. In addition to the horrific obstacles facing most refugee women, such as unsafe conditions in camps and a lack of basic access to food, clean water or healthcare, refugee mothers in particular are often struggling to feed and clothe their children and keep their families together.

"When a mother chooses to carry her baby on a boat across the Mediterranean, to flee across dangerous terrain, or travel in a truck to cross the dessert, all to resettle in a camp or unfamiliar city, the desperation they must feel is undeniable," she said. "As a mother, there is not an ounce of me that can imagine the ache one must feel in your heart when making these risky choices."

For many refugee mothers who are forced to flee their home countries and are fortunate enough to find a home elsewhere, access to education and opportunities to financially provide for their families are extremely limited. Because many women may not have legal access to employment, speak the local language, have the required certifications, or be a part of the established social networks to secure a job in their hosting economy, they often struggle to find work, Tenzin Manell, Senior Program Officer for Livelihoods in Emergencies for the WRC, added.

"When a mother chooses to carry her baby on a boat across the Mediterranean, to flee across dangerous terrain, or travel in a truck to cross the dessert, all to resettle in a camp or unfamiliar city, the desperation they must feel is undeniable."

"Families frequently stay in small, cramped spaces," said Schlecht. "Many families report that even the young children seek ways to try to support their family in difficult times." In some cases, this means working 12-hour days for as little as $160 per month in textile factories or even being forced to pick fruit on farms.

The Heightened Risks For Moms-To-Be

Pregnant refugee women often lack access to safe and hygienic reproductive health care services and supplies, putting them at increased risk when they end up going into labor. Without access to doctors, hospitals, and life-saving drugs, refugee mothers-to-be are much more likely to experience complications during childbirth.

"Without these services," Schlecht said, "up to a staggering 15 percent of [refugee] mothers will not survive childbirth."

Once their babies are born, many refugee moms do not have access to the most basic life-saving supplies to help a newborn stabilize breathing, prevent infections, and even simply stay warm.

"Refugee mothers are placed in impossible situations, where systems and supports frequently fail the needs she has for her own medical care and protection, that of her newborn, and for her growing children and adolescents," Schlecht said.

Refugees In The United States

Refugee moms need a safe place to call home, and the United States government could do much more to help. And despite Trump's claim that we don't know who Syrian refugees entering the United States are, "refugees are the most thoroughly vetted group that is admitted onto US soil," Daranee Petsod, President of Grantmakers Concerned with Immigrant Refugees (GCIR), told Romper.

Right now, the United States has a stated goal of accepting about 10,000 refugees per year. Yet Canada admits approximately 24 times the number that we do per capita, said Petsod. She also pointed out that despite conservatives' claims that admitting refugees would prove a drain on our economy, refugee families pay more than $17 million in local, state, and federal taxes during their first year in the United States alone.

"Up to a staggering 15 percent of [refugee] mothers will not survive childbirth."

American citizens can also do their part to help refugee moms and children feel welcome in our country while they rebuild their lives. "As global citizens, I feel that we are responsible to provide some element of hope or protection to these vulnerable mothers who are left with so few options," said Schlecht.

Countries like Canada, for instance, have set a precedent by forming local networks to sponsor refugee families as a way of providing them with moral and financial support during their first year of resettlement. While the United States doesn't have a similar system in place, there’s no reason why American families can’t reach out to refugee moms to, say, provide transportation to medical appointments, or even help their kids with homework.

"For an isolated refugee mom, a warm smile or a kind word from an American can mean more than you realize," Petsod said.

Perhaps the most significant way one can help refugee mothers is to speak out against unjust anti-immigration policies, particularly in the aftermath of the presidential election, when many refugees in the United States feel that their fates hang in the balance.

Ivana Popovac, a refugee and United States citizen, is one of those women. "The outcome of this election has me petrified," she told Romper.

Popovac was born in Sarajevo (formerly of Yugoslavia) and left at the beginning of the Bosnian War in 1992. After spending six years living in Germany, her family emigrated to Vermont in 1998. She now lives in central Massachusetts and is pregnant with her second child.

Popovac said she fears the outcome of the election may close borders to refugees who have nowhere to go, threaten women's basic rights over their own bodies, and "continue to grow the rift between Americans who don't agree with him at all and those who not only support him, but now feel justified in expressing their racism, sexism, and anti-immigrant stances."

"The outcome of this election has me petrified."

"If you do support the President-elect but you are not sexist, homophobic, or Islamophobic, hold him to a higher standard," she said. "Tell him and his people that his behavior and his attitudes must change. If he really wants to be a president for all, he has to embrace all."

To help support refugee mothers, you can donate to the Women's Refugee Commission (WRC), the Nurture Project International, which helps mothers affected by disaster feed their babies, or Save the Children, an organization that helps children gain access to healthcare and education in 120 countries around the world.