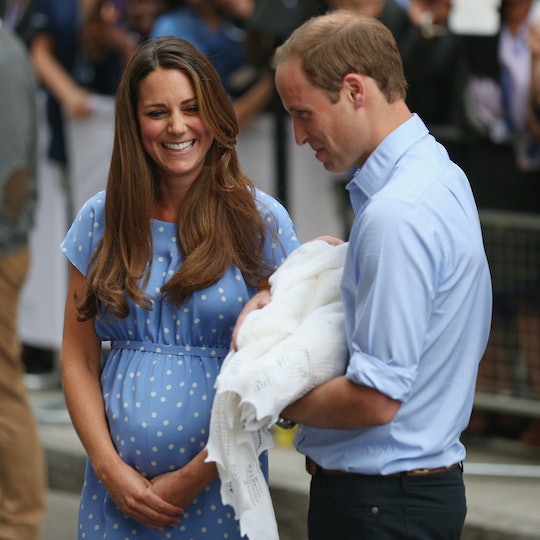 Here's What Kate Middleton Should Know About Home Birth

Will the Duchess of Cambridge deliver her third child at Kensington Palace? Unconfirmed chatter that Kate Middleton will deliver the next royal baby in a home birth there or at Sandringham Estate has been reported everywhere from Vogue to the Bath Chronicle(!), with a number of "royal sources" relaying the Duchess' supposed wishes. As mom who had three home-births, I am absolutely thrilled by the prospect of it. And if I ever met Kate, whenever I was done curtseying and fumbling over her title, I'd want to talk home birth, because I have a lot of thoughts.

The duchess reportedly wants to avoid the spectacle of a hospital birth this time around, according to the Daily Mail. Anyone who has delivered a child knows the stress of waiting for things to happen, and the idea of going through the intensely personal experience of birth with an army of paparazzi waiting in the wings is horrifying. Princess Diana told journalist Andrew Morton that she decided to induce Prince William's birth because "I couldn’t handle the press pressure any longer, it was becoming unbearable," according to People. And in fact that unwanted attention could impact the birth. A study published by The Journal of Perinatal Education study that looked into the need for privacy during birth found that "when a laboring woman does not feel safe or protected or when the progress of her normal labor is altered, catecholamine levels rise and labor slows down or stops."

There is a long history of royal babies being delivered at home — Prince William was the first royal born in a hospital, in 1982. As to whether home births are "safe" for people who don't have the royal obstetrician on call, the UK's National Child Trust states that for women having a second or subsequent baby, home birth is "as safe as" delivering in a hospital, and also offers "other benefits for the mother." So, the duchess knows what she is doing. As a home-birth believer, this is my advice to her.

Don't Listen To Anyone's Opinion, Unless Their Opinion Already Matters To You

For better or worse, Kate's pregnancies and children are never going to be a private affair. I really admire her openness about hyperemesis gravidarum. I was in awe of her absolutely divine first appearance after giving birth to George (that beautiful fluffy postpartum belly!) But let's get real, being open about her plans for a home birth probably mean she'll get unwanted opinions and advice.

During pregnancy, when I'd reveal that I was going to deliver outside of a hospital, I got one of three responses: either they'd be happy and encouraging (as I am of Kate), I'd get tight-lipped smiles, or I'd be called "brave" in a way that sounded a whole lot more like "foolish." I wanted the people closest to me to be comfortable and supportive of my decision, but outside my partner and my close family and my midwife, I didn't concern myself with what other people thought. I knew myself and how I wanted to labor and give birth. I also knew that I did not like hospitals. While one mom might feel empowered by the hospital's medical capabilities, I feel fearful of the hospital's procedures. To each their own.

Also, let's get real, I'm sure Kate's in great hands. I watched The Crown, so I know that King George had surgery inside Buckingham Palace. If the doctors can make a house call to a Royal to remove a lung, then delivering a baby should be a piece of cake.

At Home, You Have More Control Over The Birth You Want

I don't doubt that Kate will have every comfort measure at her disposal in her home birth. She's probably got a really awesome tub to soak in. She's probably got really nice sheets that she won't mind getting messy. She can listen to music loudly or make noise. She can have her kids near her if she wants.

My first child was born in a homey birth center, but as wonderful as that was, it was nothing compared to being at home. Particularly since, at home, I didn't have to go anywhere once labor started. Everything around me was familiar. There were no unfamiliar smells, even my dog and my cat were in and out of the room where I was laboring. When the big moment came, I had everyone there that I wanted. My mom, my partner, my kids, and my midwives were there. That's what I wanted, and because it was on my turf and on my terms, that's what I got.

(Side note: since smells are kind of a big deal in our memories, it's super nice that your baby only ever smells like you and your home.)

There's No "First Night Home From The Hospital"

Look, I loved Kate's first post-delivery press conference, but I kind of can't imagine what that might have been like. Your whole world has just changed. Your body is unrecognizable. And you have to walk out the doors of the hospital knowing there are scads of people waiting. One good thing about a home birth: she'll be able to choose exactly when to make her first appearance after the birth.

I've heard of many moms who felt really supported in the hospital, but had that moment of "they are letting me take this baby home?" The really nice thing about a home birth is that you are already there, in the space you were going to be doing your earliest child-rearing anyway. It's a huge transition going from two to three children, and it's nice when there's no moving or packing of bags involved in the transition. Instead of getting comfortable in the hospital, only to have the rug pulled out from under you when you get home, you get comfortable at home. I loved having my midwives around for a few hours after the birth, doing the baby check up and reassuring me that I was already recovering well. I was comforted knowing they'd return for a home visit the next day or the day after.

You Don't Have To Tell Anyone Anything Until You Want To

So, obviously I don't have firsthand experience with people stalking me to try and figure out when I would go into labor. Even without the interest of an entire nation (and many American fangirls) I felt like a watched pot, particularly with my first child (since he was the only one of mine who came after his due date). I suppose people might know when her birth team shows up at her house. But, she doesn't have to pay any attention to that. Besides, maybe they are just coming to her house for a check up.

She and William said that one of the reasons for choosing a home birth is that they know their presence in the hospital is a bit disruptive for anyone there, according to the Coventry Telegraph. But I bet it might go a bit further. I'd imagine it's difficult to live in the public spotlight. Birth is such a private and intimate thing, it's not a time in your life that you want to be put on a pedestal. Giving birth is just such a human thing. And, yes, as a home-birth mom who is decidedly a bit crunchy and a lot sentimental, there is something so cool about the fact that on the day my children were born, I was just one of many women around the world giving birth. It's sort of humbling. It's hard to really appreciate that if they are clearing a whole wing of a hospital for you because you're a VIP.

Some have speculated that even if she delivers at home, Kate will still have to do a "photo call" after the birth, as she did following the births of Princess Charlotte and Prince George, to satiate the public.

Here are my thoughts on that. Kate: get a birth photographer, as I did, and choose for yourself what you share with the public. This is your birth. Your child.

If You Love Your Home Birth, You'll Probably Want To Tell The World

After every one of my births, I've been on an incredible high. I'm so proud of what I've accomplished and so in love with my baby (who is probably the most perfect baby ever born). Because I've chosen caregivers that were on board with my wishes, I've had three awesome births that were almost devoid of any negative memories. (Like...yeah, I guess they were painful? But it's a blur and I know I handled it.) I mostly just have this overwhelming feeling of "I am awesome and I want everyone to feel as great as this when they give birth!"

I hope Kate feels this way, because I would love for her to shout the joys of home birth from the rooftops. I'm sure, in proud British tradition, she'll be polite and diplomatic when she talks to the press. But I have to think that if she has a good experience, more moms might consider having a home birth themselves. And I think, feeling like you have more choices in childbirth is an awesome thing, whether you deliver in a hospital or not.