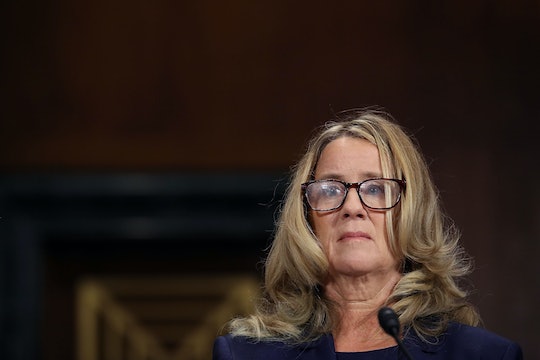 Here's What Our Sons Are *Actually* Hearing From Dr. Christine Blasey Ford's Hearing

My son is 4 and far too young to know what the Supreme Court is, let alone understand anything about the nomination of D.C. Circuit Court Judge Brett Kavanaugh. My son doesn't know what sexual assault or attempted rape is — his teachings tend toward the "Sharing Is Caring" song and perfecting his ABCs. He is too young to know that Judge Kavanaugh has been accused of attempted rape by Dr. Christine Blasey Ford. My son was in his pre-kindergarten class, playing with other 3-and 4-year-olds and counting blocks, when Dr. Ford sat in front of a Senate Judiciary Committee and told the world about how, as a teenager, Kavanaugh allegedly pinned her to a bed and groped her while laughing about it over her body with his friend Mark Judge. Sharing is caring.

While my son wasn't listening, there were plenty of sons who were. From older elementary school boys, to middle school boys, to young high school men, our sons were watching and listening and learning from the treatment of Dr. Ford and her corroborated allegations, as reported on by CBC. They looked on as one woman — one survivor of alleged sexual assault — faced what can only be described as patriarchy, misogyny, and rape culture made manifest: a room of men like Sen. Chuck Grassley, Orin Hatch, Lindsey Graham, Ted Cruz; the list goes on. One woman knowingly set herself up for emotional destruction to contribute to what she believes is the betterment of the country, while men in positions of power attempted to discredit her in order to remain in power.

Today, our sons watched as a sexual assault survivor was questioned extensively about a trauma she endured over 30 years ago; a trauma that forever impacted her life. They watched as she told her story, and commentators across the cable networks sat back and asked: Hmmm, is she credible, believable, compelling, and human? Can people believe her? How will her visceral pain impact our elected officials' political plans?

And this is what our sons learned:

Women are only credible if they graduate from top universities, or are professors at elite colleges like Stanford, or perhaps end up securing a career as a practicing psychologist.

A woman is only credible if she's a wife and a mother of two sons.

Women aren't considered reliable narrators of their own lives by white men in positions of power. On numerous occasions throughout the hearing, Dr. Ford was asked how positive she was that Judge Kavanaugh was, in fact, the man who assaulted her. Over and over again, Dr. Ford replied to these questions calmly and steadily: 100 percent.

That if a woman is sexually assaulted she has to share her story on a man's timetable in order for that assault to be credible. If she waited 30 years, her story is unreliable. If she didn't come forward early enough in a Senate Judiciary Committee investigation, her allegations are not worth investigating further.

That men in positions of power who feel emboldened to question a survivor's story do not, in fact, have the courage to question them in person. Every sitting male GOP member of the Senate Judiciary Committee surrendered their five minutes of questions to a female sex-crimes prosecutor. It was this female prosecutor, Rachel Mitchell, who did the GOP's questioning for them. Apparently, it is much easier to sit behind a screen and spew hatred, or discuss a person's credibility when they're not in the room.

Our sons learned that a woman coming forward with allegations of sexual assault will always face questions of alcohol consumption and potential inebriation. During Dr. Ford's testimony, Ms. Mitchell asked Dr. Ford if she had anything to drink and if she was on any medications that might have impeded her memory or ability to accurately recollect what happened to her. A question far too many sexual assault survivors have faced.

That a woman's fear of flying can be used to somehow discredit her motives for flying to the nation's capital in order to testify, under oath, regarding her alleged sexual assault.

That one of the most important things a sexual assault survivor can be is "attractive." Senator Orrin Hatch (R-UT) called Dr. Ford an "attractive, credible witness." When asked to clarify, Sen. Hatch said, "In other words, she's pleasing."

Of course, our sons were listening way before Dr. Ford sat down in front of the Senate Judiciary Committee. They were listening when men like Rep. Kevin Cramer (R-ND) said, "Even if it's all true, does it disqualify him? What if, what if something like what Dr. Ford describes happened. It's tragic... It should happen in our society but, but, what if 36 years of a record where there's nothing like that again?"

They were listening when Senator Orrin Hatch (R-UT) called Deborah Ramirez's allegations against Judge Kavanaugh as "phony" because "I know it is, that's why!" And they were listening when the president of the United States called the allegations against Judge Kavanaugh "false" and a "big fat con job." The same president of the United States who, on tape, bragged about sexual assault and has been accused of assault and harassment by over 16 women.

And they will continue listening, as political pundits dissect Dr. Ford's testimony and decide whether or not she is "believable enough" to be considered a credible sexual assault survivor.

A woman has essentially put herself on trial, and the judgement left for our sons to make is: When will the men who perpetrate and conceal crimes be called to answer for them?