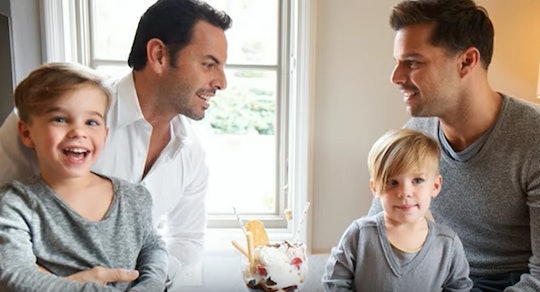 In case you didn't catch wind of the exciting news, Ricky Martin is now married to his longtime boyfriend Jwan Yosef, according to People. Shortly after the happy milestone became public, Martin gave a few interviews about the importance of normalizing LGBTQ families and why this endeavor is crucial to the well-being of his twin boys, Matteo and Valentino. And if you grew up in a diverse family or have one of your own, you'll definitely want to hear about what Ricky Martin tells his kids when they ask about having two fathers. Martin's response to his boys' question is as moving as it is empowering.

In 2010, Martin came out as a gay man via an emotional message to his fans. The note, which was posted on Martin's personal website, explained how the birth of his sons in 2008 inspired him to finally live an authentic life.

Martin wrote, according to The Guardian:

To keep living as I did up until today would be to indirectly diminish the glow that my kids where (sic) born with.

Still, the decision wasn't easy. Martin had a lot of people in his ear criticizing his sexual orientation as "evil" or as "ungodly." He explained, according to CBS Sunday Morning:

I was afraid of rejection, 'cause unfortunately, first of all, for many years everyone, a lot of people told me that my feelings were evil — 'What you're feeling is not godly.' If I'm feeling this, I'm not a good person.

To Martin's credit (and he deserves a lot), he persevered through the backlash and he came out on the other side with a beautiful and loving family.

And now that Martin is completely secure in who he is, he wants to play a pivotal role in normalizing LGBTQ families. Martin often appears on magazine covers with Josef and their two boys, and he regularly posts family snaps on Instagram.

Unfortunately, some people take issue with Martin's openness and there are a few critics who think his two kids shouldn't be so publicized. Of course, that's is a pretty upsetting criticism, because it hinges on the view that LGBTQ families shouldn't be celebrated or seen as legitimate.

The good news is Martin has absolutely no time for the backlash. Martin explained, according to Us Weekly:

A lot of people tell me, ‘Well, your kids are on the covers of magazines and blah, blah, blah,’ and I’m like, ‘Yes, because I want to normalize this “I want people to look at me and see a family and say, ‘There’s nothing wrong with that.’

Martin also added that his "mission" of normalizing LGBTQ families is something he wants his sons to appreciate too. Martin said, according to Good To Know:

It’s part of my mission. It’s part of my kids’ mission as well. My kids ask me about having two daddies and I tell them we are a part of a modern family. This is a beautiful sense of freedom.

Yep, Martin's comments about this topic definitely made me tear up. For starters, it's amazing that Martin is doing so much work for LGBTQ families, especially when you consider where he was in life 10 years ago.

Secondly, it's important to recognize the importance of Martin reiterating to his kids that they're a family, regardless of what people might say or think. To refer to Martin's brood as anything less is not only inaccurate, but it's also hurtful to the millions of families out there with same-sex parents.

Lastly, I have to give Martin praise for instilling such a sense of confidence and pride in his boys at an early age. Martin is definitely raising his kids to be thoughtful, kind, and tolerant people, which is just incredible.

Now that Martin is officially hitched, I expect he'll be more vocal about his adorable family in the weeks and months to come. Personally, I can't wait to see what he does next.