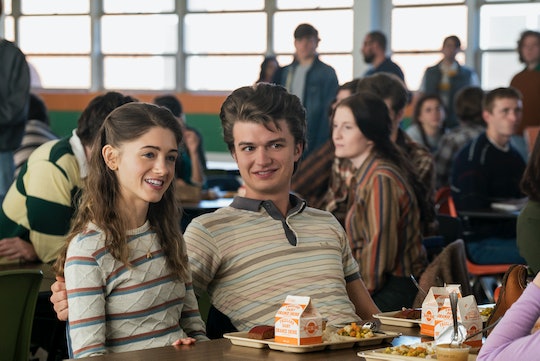 You Won't Believe What Steve From 'Stranger Things' Looks Like IRL

Season 1 of Stranger Things had veteran actors like Winona Ryder, but for the most part it featured fresh faces most viewers hadn't seen before. One of the teenage stars that gained fame was Joe Keery, who plays Nancy's boyfriend Steve on the show. Steve wasn't a main character and he wasn't involved in the main plot, but he quickly became a memorable face, though you may be surprised to see what Steve from Stranger Things looks like IRL.

In regards to his on-screen counterpart, Steve is currently a student at Hawkins High School. Soon after the season began, he started dating Nancy, Mike's older sister. Steve was friends with some school bullies Tommy and Carol, and took Nancy (and her ill-fated friend Barb) to a pool party with them. Steve and Nancy started getting pretty serious, but Nancy became distant when Barb disappeared (not to mention that her brother's best friend Will had also disappeared as well). Steve apparently didn't get the memo that having your friend go missing is a traumatic experience, so he assumed she was sleeping with an outsider named Jonathan. He had a change of heart when Tommy and Carol began talking trash about Nancy though.

After doing a complete 180, Steve went to Jonathan's house to talk to Nancy. While there, the Demogorgon was attempting to escape the Upside Down; Nancy and Jonathan were trying to fight him off. Nancy told Steve to leave, but he ended up striking it with a bat and helping destroy it. At the end of the season, he and Nancy had gotten back together. In an interview with Tyranny of Style, Stranger Things costume designer Kimberly Adams discussed putting together Steve's look for the show. "Steve comes from a wealthy family and was what we called a 'prep' in high school, preppy and cool," she said. "Polo shirts, Levi’s, khakis, and Brooks Brothers basics worn with attitude!"

Stranger Things hair stylist Sarah Hindsgaul achieved the "preppy douche" look for Steve as well. She told Refinery29 last year, "We spent a lot of time discussing what he should look like so he really rubs people the wrong way; to make him look like kind of a douche." Not only will he be in the second season of Stranger Things, but Keery is now a series regular. So, viewers can expect to see more of his preppy look and huge hair. But what about the actor himself? Does he rock the mullet and polos in real life?

I'm not going to avoid the elephant in the room any longer: Steve looks just like Jean Ralphio from Parks and Recreation. The similarities between actors Joe Keery and Ben Schwartz are so undeniable, in fact, that they teamed up for a video on The Late Late Show with James Corden. In the tongue-in-cheek sketch, they confirmed the popular internet theory that Steve is Jean Ralphio's father.

Besides bearing a resemblance to Schwartz, it seems that Keery looks pretty similar to Steve IRL. They both have huge hair and their clothes are well put together. According to Keery, Steve has grown from Season 1 to 2. "He’s changed," Keery told Show Biz Junkies. "I think he’s learned from his ways and his experiences from the first season." That's great to hear. But regardless of his character's style or personality upgrade, I know I won't be able to stop comparing Steve to Jean Ralphio — and neither will the rest of the internet.