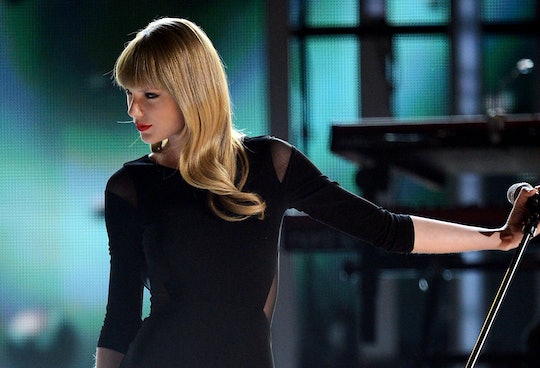 Besides being a powerhouse performer, Taylor Swift is also a world-renowned songwriter. Really, much of Swift's career can be attributed to her writing skills. So, it's no surprise that she's released a magazine along with her new album. But, what does the Reputation prologue mean? Swift's introduction to her newest album is introspective, as well as critical, of the specially-curated world we live in.

In the past, Swift has taken careful measures to promote her new albums with appearances, interviews, and regular updates into her personal life. Now, though, with Reputation, Swift has been backing away from any sort of spotlight that she hasn't designed herself. Basically, Swift is telling her story, and not letting any other appearance or outfit or update speak before her music does.

So, Swift has taken to the special edition Reputation magazines to speak her peace about what's inspired this album, and, in doing so, is taking away much of the power the media has. Because now, Swift's words are just there. She is opening up for the first time in a while, and the Reputation prologue is a glimpse into what's been going through Swift's mind lately. And after all the drama over the past year, it makes sense that Swift would take the opportunity to address that, in the most poetic, poignant, Swift-y way possible.

In the Reputation magazine, fans get a glimpse into how everything that's happened over the last year and a half has affected Swift. And the prologue for Reputation gives some pretty straightforward clues as to what Ms. Swift is feeling convicted about. That thing? Image.

"Here's something I've learned about people," Swift begins the prologue, setting the stage for a form of cultural anthropological perspective only she could give. "We think we know someone," she continues, "but the truth is that we only know the version of them they have chosen to show us."

In that opening light, an immediate realization is made that Swift is keenly aware of her reputation, her image, and what everyone thinks of her. More than that Swift wants the reader to know that that version of herself isn't necessarily accurate.

Swift goes on to say that social media and the internet have completely changed human nature in a way deeply rooted in who you truly are. "Ultimately," she writes, "we post photos online to curate what strangers think of us." But, that doesn't mean what's posted is an accurate representation of who someone truly is. And Swift says as much when she continues on, "despite our need to simplify and generalize absolutely everyone and everything in this life, humans are intrinsically impossible to generalize."

And she doesn't stop there. One of Swift's most impressive lines in the prologue comes when she describes the many paradoxes that humans encapsulate:

We are mosaics of our worst selves and our best selves, our deepest secrets and our favorite stories to tell at a dinner party, existing somewhere between our well-lit profile photo and our drivers license shot.

Basically, people are always so much more than what they're made out to be, Swift argues. People can have bad parts about them, but they also have beautiful and important parts to them as well. And that's something everyone should understand about Swift, it seems.

After recalling all the perks of the life she's lived, Swift goes on to acknowledge the downsides to fame:

And truly, Swift has a point. Earlier in her career, Swift was frequently slut-shamed for, ya know, being a young woman who dates men. And now, she still receives criticism for dating, and for a plethora of other things that she shouldn't be. So, as the prologue reads, she has a message for everyone who thinks their opinion of Swift is the final judgement call:

When this album comes out, gossip blogs will scour the lyrics for the men they can attribute to each song, as if the inspiration for music is as simple and basic as a paternity test ... Let me say it again, louder for those in the back... We think we know someone, but the truth is that we only know the version of them they have chosen to show us. There will be no further explanation. There will just be reputation.

So, what's Swift's message here? TLDR: don't assume anything about anyone, no matter how convincing something about them might seem.

Swift's songs have long provided an extremely personal glimpse into her love life and personal life, but that doesn't mean they should be taken at face value. Or, maybe that's exactly how they should be taken. Either way, she knows what everyone else is thinking about her perceived reputation — whether it be with her friends or her love life — but those opinions won't (and don't) matter to her.

While Swift has long been hailed as the queen of hidden messages, the fact that she's being so upfront and honest with Reputation may just mean that she's done hiding her true thoughts and she's leaving it all in the songs. And this time, she's really letting the music speak for itself.