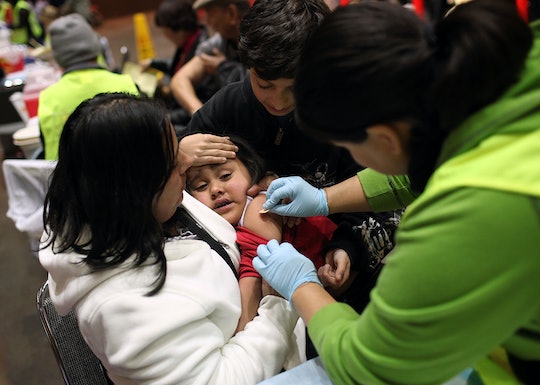 Here's What To Do If Your Toddler Has The Flu, According To Experts

This round of cold and flu season isn't just dangerous, it's already proved deadly. According to reports from all 50 states, this powerful strain of influenza, H3N2, is said to be a stronger, lasting longer form of the flu, putting the already vulnerable at risk. And though this incredibly virulent strain doesn't discriminate, those over 65, people with chronic medical conditions, and children are especially susceptible. So, with that in mind, here's what to do if your toddler has the flu, according the the experts. After all, you can never be too careful.

Dr. Dan Jernigan, director of the Center for Disease Control and Prevention's (CDC) influenza branch, tells ABC Action News that, "This is the first year we've had the entire continental US at the same level (of flu activity) at the same time." A recent CDC weekly report estimates that 20 pediatric deaths have occurred this season already, and children under 5 years of age are most at risk. An astonishing 22.7 percent of laboratory-confirmed influenza-related hospitalizations for every 100,000 people was reported the week ending January 6, which is almost double the 13.7 percent from the week prior. While those over 65 made up the majority of the aforementioned numbers, perfectly healthy adults have also been affected. Perhaps most upsetting is the fact that children are among the climbing percentages for both hospitalization and death due to pneumonia and influenza-related complications, including sepsis.

The stats, as you can see, are alarming. And because the flu virus spreads through speaking, coughing, sneezing, and touching a surface that's come into contact with the virus, it spreads fast and relatively easily. According to the CDC, you're contagious one day before you're sick, and can remain contagious for up to 5-7 days after transmission. Thankfully, as a parent there are a few steps you can you take if your toddler has the flu to ensure they're back to their healthy selves in no time.

Though some experts say it's only up to 30 percent effective, the first step is to make sure your family is inoculated with the flu vaccine as soon as possible. So if you haven't done so, it's time to make that appointment, dear reader. As the first major defense against the flu, the vaccine protects against three or four viruses — H1N1, H3N2, and one or two influenza B viruses — starting at 6 months of age. The vaccine lowers the chances of passing the flu to other members of your family, too. Dr. Juan Dumois with Johns Hopkins All Children's Hospital, tells ABC Action News, "We’ve seen a lot more kids being seen in the emergency room and some of them are being admitted to the hospital with a really bad case of flu." He adds that those children didn't have the flu shot. It's worth getting, even if it only helps a little, because the effectiveness varies from strain to strain.

CNN advises you to seek medical treatment if your toddler shows any of the following flu-related systems: high fever, trouble breathing or fast breathing, bluish skin color, dizziness, vomiting, not drinking enough fluids, not waking up or not interacting, irritability and not wishing to be held, if symptoms improve but then return or grow even worse, or a fever with a rash. Likewise, Time suggests going to the doctor if your child complains of respiratory distress, sneezing, stuffy nose, and sore throat. Antiviral drugs work best if your child is prescribed within 48 hours of becoming ill, which is why you shouldn't put off going to the doctor, or urgent care, even if you aren't sure it's "bad" enough. Early intervention matters.

The CDC advises parents to keep their children home until 24 hours after their fever breaks. A fever is considered "a temperature greater than or equal to 100 degrees Fahrenheit (37.8 degrees Celsius)." After consulting with your doctor, there are age-appropriate over-the-counter pain relievers to reduce the temperature and duration of a fever you can choose to administer to your child. Be sure they also get plenty of rest and fluids, replacing any electrolytes they may have lost with drinks like Pedialyte.

Some other ways to prevent the spread of the virus, the CDC adds, is to keep your child in a separate room of the house, don't let them share food or drink with anyone else, and try to have only one caregiver with the child to keep the potential of cross-contamination at a minimum. If you're doing all of the above, the next step is to simply be patient. This particular virus strain lasts a little longer than previous versions, so don't be surprised if your child stays sick longer than what you've grown accustomed to weathering. And, as always, trust your gut. If your child isn't improving, or something feels off, it's best to contact your physician or make your way to the nearest hospital. It's better to get a doctor's opinion than to brush off potentially dangerous symptoms as nothing more than a common cold.

More Like This
What Is RSV?
These 9 Potty Training Techniques Will Work On Even The Most Stubborn Toddler
How Often Should A Toddler Pee When Potty Training? It Depends
Tips For Apple Picking With Kids