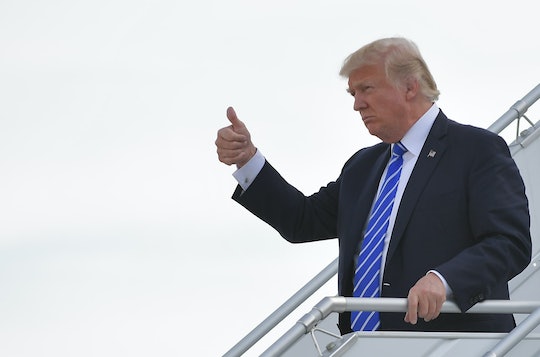 When President Donald Trump threw his hat into the election ring, he did so insisting that his lack of political experience was going to be a huge asset for the American people. He claimed that, as a businessman, he was going to "drain the swamp" and single-handedly turn the economy around using his deal-making skills, and promised that the average, hard-working American would benefit. On Wednesday, the Trump administration released its proposed tax plan, and said it was “completely designed with the middle class in mind.” But was it? Here's what Trump's tax plan means for working class families, because so far, it looks like it's wealthy Americans and business who stand to gain the most.

More Like This
Obama Said The Sweetest Thing About His “Friend” & Family Dog Bo
Wait, Did The Government Actually Do Something For Parents?
The Obamas’ New Family Rule? Get Vaccinated If You Want To Hang Out With Us
Vaccinated People Can Ditch Masks. Where Does That Leave Kids?

Trump has long promised to provide an overhaul of the nation's tax code, and the GOP's tax framework appears to do just that. But according to Think Progress, Trump has also promised — even very recently — that he would “cut taxes tremendously for the middle class” while also promising the wealthy wouldn't be gaining from his tax plan. The changes he's proposing don't actually seem to back up that claim, though — particularly given that he's cut the tax rate for the top income bracket, slashed the corporate tax rate, and eliminated the individual Alternative Minimum Tax, which is meant to prevent the wealthiest Americans from being able to significantly reduce their taxes through deductions and credits.

One thing that seems pretty clear so far is that high-earning Americans will likely find Trump's tax plan helpful in a number of ways. According to USA Today, the plan would reduce the number of individual tax brackets from seven to three — something Trump has said would simplify the tax code. But in doing so, he's also proposed that the top bracket's tax rate be lowered from the current 39.6 percent, to 35 percent, while the lowest bracket would actually see an increase, from 10 percent to 12 percent. That doesn't necessarily mean that working class families will see their tax rates increase (the plan doesn't yet specify the income levels for each bracket), but it does mean that those at the top will be paying less.

The elimination of the Alternative Minimum Tax is yet another way that wealthy Americans will benefit. For those who earn around $250,000 or more in adjusted gross income, the AMT ensures they pay their fair share at tax time. According to Think Process, that meant that Trump paid around 24 percent in taxes on the $150 million Trump himself earned in 2005. Without it? He would have been able to decrease that amount to only 4 percent. The plan will also eliminate the Estate Tax, which applies only to those with assets of more than $5.49 million, according to NPR.

What's much less clear though is how the plan will actually affect everyone else. One major element that will be of interest to families is the standard deduction, which would nearly double, to $12,000 for individuals and $24,000 for married couples, according to The Hill. For low-income Americans, that would likely help offset the 2 percent increase in the lowest tax bracket (so, more Americans would actually end up in a zero percent bracket), but it's less clear how it would affect those in the middle. The current $1,000 child tax credit is also set to increase, and the plan would introduce an additional $500 for non-child dependents, according to USA Today, which could also be very helpful. The plan doesn't specify how much the tax credit will increase, though, which makes the overall impact hard to measure.

That's especially true considering that Trump's plan will actually do away with personal exemptions, which will likely make the standard deduction increase less helpful. Bloomberg predicts that it will likely translate into tax increases for some families: without the current personal exemption, a middle-class couple with three kids could expect to see their taxable income increase by $20,250 under Trump's plan, which is much higher than what they'd gain from the increase in the standard deduction, while for others, the benefit may be marginal.

And still, that's mostly speculation. Tax Policy Center Senior Fellow Howard Gleckman told The Huffington Post that while families could potentially benefit under the new plan, depending on the size of the child tax credit increase (and the size of their family) relative to the loss of eliminated deductions, there isn't nearly enough information to know for sure. Gleckman said, "Without knowing exactly what the plan is for those other itemized deductions, it’s very hard to say whether people are better off or not."

In other words, the only thing that seems clear from Trump's tax plan at this point is that it'll work out pretty well from those currently in high tax brackets — and that he says it will also work out pretty well for everyone else. But so far, that's not a claim he's been able to prove. And until working class families are actually able to see exactly where they fit into the new tax framework, it'll remain unclear whether or not Trump will be able to deliver on what he's promised.