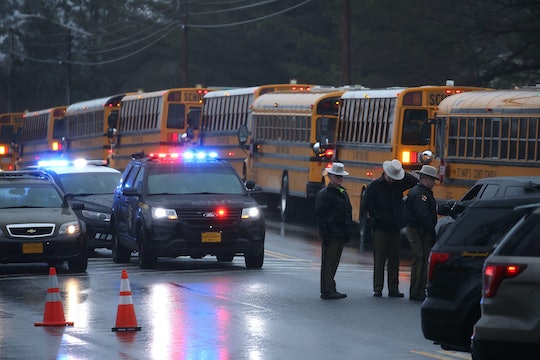 Cpl. Julie Yingling, a spokeswoman for the St. Mary’s County Sheriff’s Office, said the shooting took place at Great Mills High School at 8:15 a.m., Eastern Time, according to The Washington Post. On the St. Mary's County public schools website, around 10:30 a.m. on Tuesday, a banner message reported that "Students are being evacuated from GMHS and being bused to the reunification center at the Leonardtown HS campus. The building is orderly and the Sheriff’s Office is conducting an investigation." The message also stated that updates would continue as more information became available.

So what exactly happened at Great Mills High School? Three people were reportedly injured in a shooting there Tuesday morning, according to The Baltimore Sun. Early reports stated that no fatalities had been confirmed, but by 11:30 a.m. EST the Sun reported that the shooter had died. Two of the injured victims are reportedly students, county spokesman Tony Jones at the emergency operations center told The Baltimore Sun.

Just before classes started on Tuesday, a "colleague" of the two injured students opened fire in the hallway, according to NBC News. The shooter reportedly "fired a round at a female student, also hitting a male student," the outlet reported. But the school's resource officer was alerted to the situation and quickly confronted the shooter, according to St. Mary's County Sheriff Tim Cameron.

The situation is contained, according to the school district's Twitter account, and officials told parents to go to a staging area about 10 miles away to reunite with Great Mills High School students, according to The New York Daily News.

Unfortunately, this is just the latest of far too many similar school shootings in the United States. In fact, this incident occurred just over a month after the fatal shooting at Marjory Stoneman Douglas High School in Florida.

Survivors of that shooting have since launched the #NeverAgain movement, and the March for Our Lives — a nationwide protest against gun violence — is scheduled for Saturday in Washington D.C, with sister marches in cities across the country, according to The Cut.

People on Twitter had a lot to say about the shooting on Tuesday. Twitter users are upset that there's been another school shooting, and many people brought up gun law reform and the prevalence of gun violence in the U.S.

In particular, Parkland student organizers behind the #NeverAgain movement and the March for Our Lives event reacted to the situation on Twitter with support and resolve.

There have already been 17 school shootings where someone was hurt or killed in the U.S. in 2018, according to CNN. That averages out to about 1.5 shootings a week. Sadly, the shooting at Great Mills High School is just the latest incident.