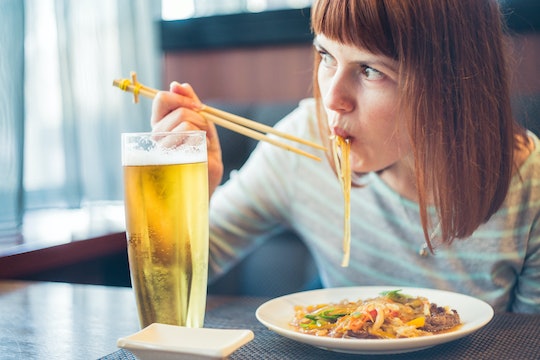 Here's What You Can't Eat While You're Pregnant, According To Experts

You've seen the pink or blue line, jumped up and down, probably made some excited phone calls, and are ready for a celebratory brunch. You're about to order your usual egg, bacon, and cheese whatever when you remember some article from way back when. Should you be eating any of that right now? You kind of remember something about cheese being "bad," but can't remember if it applied to all kinds of cheeses. And what about eggs (Et tu, Brute)? What can't you eat while you're pregnant?

As a pregnant human you are going to undoubtably have a wide variety of worries, so avoiding certain foods for 40 weeks (more or less) can feel like nothing more than a personal slight. There's a reason behind the recommendation, though. As the Food and Drug Administration's (FDA) website explains, when you're pregnant your immune system is a bit "altered," which can make it harder for your body to fight off certain kinds of food-borne microorganisms. And, as the FDA further points out, your baby's immune system is still developing, which puts your baby at an even greater risk if faced with harmful microorganisms because they can't even fight them off. If you get sick from a food-borne illness, your symptoms can range from mild to horribly dehydrated, all of which could have a potentially harmful impact on your fetus.

Even if you don't feel any symptoms, the FDA says you can still pass an infection to your unborn child, who may be experiencing the effects of the illness. One of the more common food-borne illnesses caused by bacteria is listeria. The website for the American Congress of Obstetrics and Gynecologists (ACOG) explains that pregnant women are 13 times more likely to get listeriosis than the general population, and the way to avoid getting it is by avoiding certain foods during pregnancy.

Rest assured, even the ladies who've been through the whole pregnancy thing before are known to forget what's on the "Do Not Consume" list. So don't feel bad for not knowing it all the moment that pregnancy test turns positive. It's also important to note that not every doctor is in agreement about which foods are "bad" and which foods aren't. Some OB-GYN's will say they're cool with you eating, for example, sushi, as long as it's from a very reputable place and in moderations. Others will say no way, never, not a chance to those (raw) tuna avocado rolls.

Experts (at least, the online ones) seem to agree on a quite a few things when it comes to what you can and cannot eat when you're expecting. As ACOG's website states, for example, omega-3 fatty acids found in many kinds of fish can be important to the development of your baby's brain both before and after birth. So definitely eat your fish when pregnant, because it is good for you and for your baby. The Mayo Clinic's site warns, however, that you should avoid certain types of fish that contain high levels of mercury, such as swordfish, shark, mackerel, and tilefish.

ACOG, The Mayo Clinic, and the FDA all suggest avoiding raw seafood (e.g. oysters, scallops, clams) and undercooked seafood (such as sushi, nova style salmon, kippered salmon, whitefish, trout, or cod), raw eggs, and raw meat. Hot dogs, deli meats, and lunch meats should also be avoided (as they can be sources of listeriosis). Soft cheeses — such as feta, brie, and camembert, blue-veined cheeses, queso-fresco, and panela — are also considered a "no." Ditto for refrigerated pates, meat spreads, and raw (unpasteurized) milk, including any foods that contain unpasteurized milk.

But wait! We're not done. Even certain veggies are not safe. The sites Foodsafety.gov, The Mayo Clinic's site, and the FDA's site all point to raw or undercooked sprouts as a food that has often been contaminated with E. coli or Salmonella and that is a good idea to avoid.

Drinks-wise, you probably are familiar with the American Academy of Pediatrics' (AAP) stance that no amount of alcohol is safe to consume while expecting. As for the java, as ACOG explains, while there have been many studies on the effects of caffeine on miscarriage, the results remain unclear. Most experts advise no more than 200 mg of caffeine a day during pregnancy. With regard to herbal tea, as The Mayo Clinic's site notes that you may want to abstain from that as well, as there's not much data on how specific herbs affect developing babies.

Don't despair, though. You won't be wasting away while you're expecting. Cooked sushi is still safe to eat, according to the FDA, ACOG, and The Mayo Clinic. They also all agree that it is OK to eat deli meats and hot dogs that have been cooked to steaming hot temperatures. Canned or shelf-stable smoked seafood is A-OK, too. And for you cheese lovers out there, as The Mayo Clinic explains, you can have your feta or your blue, as long as it specifically has a label that says "made with pasteurized milk" on it.

You can take some of these recommendations to greater lengths, if you wish. In the Mayo Clinic's recommendation about what to avoid with regard to eating eggs, it says that you should avoid runny eggs because of the possible bacteria it could contain. The cite also says it's not the worst idea to put raw cookie batter, homemade hollandaise sauce, and Caesar salad dressing under lock and key. The Foodsafety.gov site also recommends avoiding any salads made in a store, such as ham, chicken, and seafood salad (for fear of listeria).

An interesting study, published originally in the journal, Canadian Family Physician (CFP) and cited on the National Institute of Health's (NIH) website, aimed to debunk some of these stringent food restrictions on pregnant women. The study concludes that because of improved standards of food preparation and quality in grocery stores, it is no longer necessary for pregnant women to avoid foods like deli meats and soft cheeses, soft-cooked eggs, and sushi and sashimi, as long as the food is handled properly, obtained from reputable establishments, and consumed soon after purchase. (Raw and undercooked eggs, however, are still a no-go in this study unless pasteurized eggs are used instead of shell eggs).

But before we start breaking out the smelly cheese plate, it is important to note that this was just one study, the findings of which did not lead healthcare professionals everywhere to change their stance on what foods to avoid. A follow-up study was published soon after this one, (in the same journal, and also cited on the NIH's site) in response. It took a more measured approach than its predecessors, stating:

"We strongly believe that each woman should be informed of the nature and magnitude of the risks associated with the consumption of deli meats and soft cheeses. The decision to consume or avoid these foods should be made by her, based on this information, allowing her to make an informed decision."

Even after you've been armed with information from your trusted doctor, articles from "the experts" and all that late-night Googling, you still might decide to go your own way when faced with a delicious-looking Italian hoagie (that's just my example, you can have our own dream). What you decide to eat or not eat is, in the end, up to you. The important thing is that you understand the risks associated with each food before deciding to take take the plunge (or, um, plunge it down your gullet).