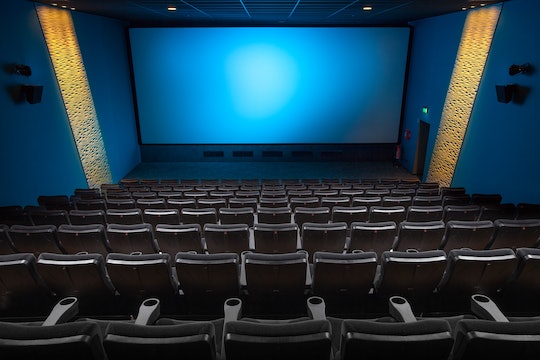 Here's What You Need To Know About Breastfeeding In Movie Theaters

I breastfed my children pretty much everywhere. I remember once at the Statue of Liberty, a bee landed on me and I ran away, holding my baby with my breast flapping like a wing. Of course most laws say you're allowed to breastfeed anywhere, but there are some places where people are unsure of nursing their baby, like while seeing the latest Marvel flick. But what you need to know about breastfeeding in movie theaters may make you feel a little better.

I want to say that having my children in New York City exempted me from much of the scrutiny and antics of the boob shamers, but I wasn't. More than once, I was given a snide comment, or stared at like a Christmas goose. Strangely, no one said "boo" at the Statue of Liberty, but I think plenty of people were laughing at me, my mother included. In fact, I think my mom actually started crying she was laughing so hard. (Honestly, though? It was a bee. Since I'm allergic to bees, I'm fairly certain it was trying to kill me. I can't help it if my boob was flailing like one of those inflatable tube men they blow up in front of car dealerships.)

But I never actually tried to breastfeed at the theater and it's not because I was afraid of being shamed. I just didn't see any movies when I was breastfeeding because it would've been a waste — I totally would've fallen asleep.

But it turns out, the shamers can keep quiet regardless. In 47 of the 50 states of the U.S. and the U.S. Virgin Islands, you're well within your right to breastfeed anywhere the public is welcome, noted The Huffington Post.

The exceptions are South Dakota, Virginia, and Idaho. In South Dakota and Virginia, breastfeeding allowances are up to the discretion of who is in charge, but you're exempt from public indecency and nudity laws. Idaho has no laws protecting nursing mothers. None.

If you're allowed to breastfeed in public, though, are movie theaters special? Is there some rule that prevents you from breastfeeding and watching hobbits walk to Mordor?

If you're in one of the three unprotected states, it's up to the theater. You can call ahead or check online to see what their policy is, but be forewarned, management has the right to ask you to cover up or leave — and they don't always go by corporate policy.

In the other states, as long as the movie is not NC-17 or X, you are allowed to breastfeed your baby, according to La Leche League International. The theater does have the right to make you buy a ticket for the baby, and they can ask you to leave if your baby makes noise, but provided you're both quiet, you're good. As for whether or not you should bring a baby to the movies, that's entirely up to you. It's 100 percent a personal choice and as etiquette is subjective, you do you. Personally, I get irritated at any disruption of an adult movie, and this includes my own husband who always decides to get chatty during a movie. (What the heck, dude? You literally never talk anywhere else.) Although to be fair, your newborn is likely less annoying than my husband who is in his 40s.

However, if it's a kids' movie, you should totally get good at the "go screw yourself" glare in case anyone looks at you sideways. (It will come in handy as your baby gets older, too.) Here's the thing with breastfeeding in a movie theater — you need to get out of the house and your baby has to eat. So enjoy your popcorn and your movie.