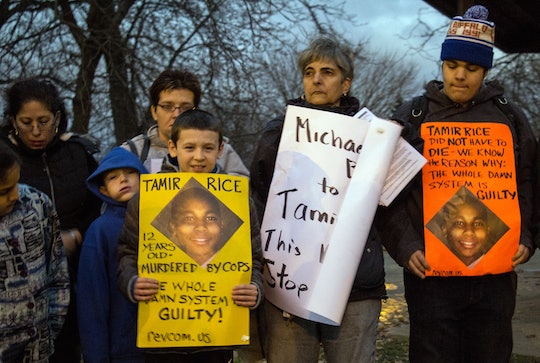 A grand jury decided Monday that there would be no charges for the officers involved in the shooting of Tamir Rice. While Cleveland and other cities start to protest the grand jury’s decision, people should know that there were lots of factors in the Tamir Rice case that made it difficult to indict the officers. In an official statement, Cuyahoga County prosecutor Tim McGinty said that the incident was a “perfect storm of human error,” but not, at the end of the day, a crime, according to the Associated Press. There are a few things you should know about the Rice verdict to understand why it was complicated and why protestors are so outraged.

According to the AP, Officer Timothy Loehmann shot Rice within “two seconds” of pulling up to the scene in a police cruiser. There are lots of aspects of the Rice case that made it a hard sell to a grand jury. And there are lots of details about the case that are not clear and raise questions for anyone who was hoping for an indictment. It was all about how real the gun looked, how old Rice was and how “indisputable” it was that Rice was drawing his gun from his waist.

Rice was carrying an Airsoft gun, which doesn’t shoot real bullets, but looks pretty real. According to Buzzfeed News, the gun was in Rice’s hand when he was shot. While there are no charges, there are lots of reasons protesters are looking closer at the case:

Prosecutors Fought To Show That His Gun Looked Real

Photos showed that the gun did have a resemblance to a real gun, which helped McGinty's case that Loehmann acted reasonably.

The 911 caller told the dispatcher that the gun Rice held might have been a toy and that Rice appeared to be a minor, but the dispatcher didn’t relay that information to the responding officers.

Loehmann Was In Training

The officer who shot Rice was in training. He was accompanied by 46-year-old Officer Frank Garmback, who is not facing charges either. Loehmann was 26 at the time of the shooting. While he's now on restricted duty, it's not enough for some who think he should be suspended from duty altogether. During the shooting, Loehmann gave no verbal warnings to get Rice to stop moving or to drop what appeared to be a weapon, according to the New York Times.

The lack of information the 911 dispatcher gave to the officers, the fact that the gun was a toy, Rice's age, and Loehmann's lack of experience are fueling outrage at the decision and leading to protests around the country. But the decision was complicated. Police officers are acting on their training when they come into contact with someone they believe to be wielding a weapon. Loehmann's training was limited, but the grand jury believed his actions were reasonable.

Still, it's clear that many errors were made by people involved in the incident, so the outrage that protestors around the country felt after the decision is entirely understandable and totally justified.