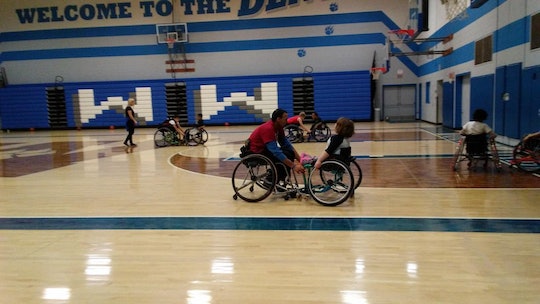 Let’s get this out in front, before I continue. I do not have a disability, but my daughter Namine does. She enjoys going on what she calls “wheel runs.” A plain ol’ run is where I run, and she wheels next to me. A wheel run is where we’re both in wheelchairs. Namine has her everyday chair and a couple of sport chairs (for basketball and other sports), so for a wheel run, she stays in her everyday one and lets me use one of those.

A few months ago, we went on a wheel run for the first time, and it kicked my butt. I learned many new things about using a wheelchair, and it gave me a newfound respect for my daughter — respect that I must admit I ought to have had all along. Yesterday, Namine and I went on another wheel run.

It just so happened that there was a parade going on when we went on our run. (I’m just going to refer to it as a run from here on out. I trust you understand what I mean.) The path we went on had a sidewalk, and a very large hill. Namine is quick in her wheelchair, but sometimes she still needs help with steep hills. So, I offered to do what she sometimes does herself in basketball practice: I offered to pull her up the hill.

It was still a workout for Namine, since she was holding herself and her chair against the downward pull of gravity on a hill. I may have overestimated my own ability, because I was not able to maintain the speed I’d started off with. Still, we kept on — me pulling us, and Namine holding on.

Because there was a parade going through on the other side of the road, people were all lined up on the grass. (None were on the sidewalk, luckily.) We attracted plenty of attention on our own, and no less than seven people came over to push us up the hill.

“No, thank you,” I said every time. I didn’t say much else, aside from the occasional “I got it,” to ward off another would-be helpful soul. One woman, whom I did not see, grabbed the back of my wheelchair and started pushing. I’m pretty sure I was polite — at least with my words, although it’s possible I snapped a bit — when I said, “I can do it on my own, thank you.”

Should I have mentioned I wasn’t disabled? Should I have gotten out of the wheelchair? Neither of those things occurred to me at the time. I was simply focused on getting us up the hill. I did get a little more annoyed every time someone new came up and offered to push us up the hill. I can only imagine how Namine feels — so I asked her.

Most of Namine’s friends are able-bodied. Some of them like to push her when she’s in her wheelchair. Sometimes she’ll allow it, but most of the time she prefers to push herself. She doesn’t always wheel as fast as they’re walking, but that’s not the point. The point is independence, something about which Namine has always been adamant.

If Namine is struggling to get up a hill, or her arms are tired or hurting, she’s not opposed to accepting help. She’s told me before, and she reiterated it after I asked, that she wouldn’t be able to do what she is able to now without having been helped in the past. As usual, she’s right. But even in accepting help, notice that she has autonomy, provided a person asks first.

Countless people have helped her, and I’m not just talking about Jessica and myself, and our families. Countless doctors, nurses, hospital and therapy staff have been there for her, helping her along the way.

My daughter continues to amaze me. I’m not done learning from her.