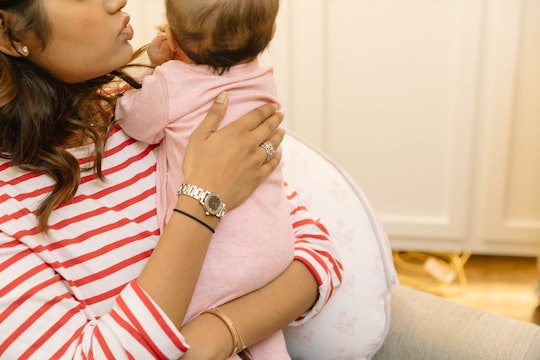 I've come to the conclusion that a quarter of the task of raising children is deciphering their ailments. Is the preschooler waking up screaming about his leg because of growing pains or should I take him to the doctor in case it's cancer? Does the toddler's green snot mean he should be on an antibiotic or is it just par for the course in the winter? The symptoms can be particularly scary when your baby is involved. A simple cough, for instance, can mean a lot of different things in an infant, making you wonder what your baby's cough means in terms of their health. Turns out, a cough can tell you a lot.

Dr. Samira Armin of Texas Children's Pediatrics spoke with Romper about infant coughs, saying they are simply the body's way of reacting to illness and are often innocent unless presented in conjunction with symptoms such as high fevers or difficulty breathing. "Sometimes when a cough is present in children, it may be hard to know if you should call your doctor for advice, make an appointment, or head straight to the Emergency Room for immediate care," sympathizes Armin. "It is important to remember that coughs are a natural part of life and the body's way of protecting itself. In children, a cough should rarely be suppressed." There are actually three main kinds of infant coughs to distinguish between: A wet cough, a hoarse cough, and a cough with lots of phlegm.

What about a hoarse cough? "In young children and babies, a dry or hoarse cough can signal croup. Croup is often due to a viral illness that causes swelling around the voice box. Babies and children with croup have a characteristic 'bark-like' cough which is sometimes associated with noisy breathing." Armin continues, "Croup can often times be managed at home, with humidified air (such as steamy showers) and supportive measures, but occasionally requires medical intervention. Any time a child is having trouble breathing, you should seek immediate medical attention."

But don't jump to the worst conclusion just yet: The most common culprit of a phlegm-filled cough is simply the common cold, which can last up to two weeks and which children get an average of 10 times per year.

Parents should note that cough medications and suppressants are no longer recommended for infants and young children. Medical professionals now believe such medicines prevent the body from naturally clearing itself of mucus and suppress any natural urges. Current treatment recommendations include good hydration, nasal aspirators with saline mist, cool mist humidifiers and, for babies over the age of 1, a small spoonful of honey.

More Like This
Abbot's Formula-Producing Plant Can Reopen In As Early As 2 Weeks — Now What?
Can You Help Your Baby’s Hair Grow?
Here’s What You Need To Know About That Viral 1960s Baby Formula “Recipe”
Here's When Your Baby Might Start Sleeping Through The Night For Real