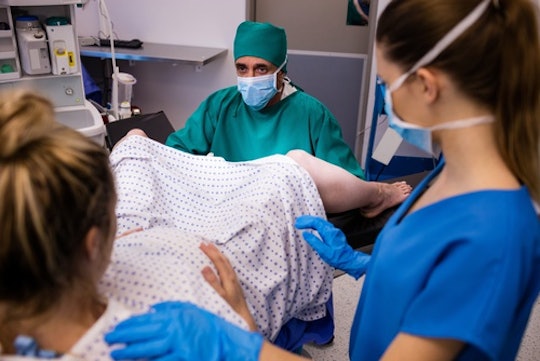 What Your Doctor Really Thinks Of Your Birth Plan

Birth plans are a hot topic among pregnant women. Some people swear by the importance of having one — and a detailed one at that. Others find them kind of laughable, on the grounds that the “best laid plans” are the ones that are most likely to fall apart. For those who want to make a birth plan, there are plenty of templates you can find online, which contain everything from the details about your delivery room (low lighting? music? a birthing ball?) to major medical decisions like episiotomies and c-sections. But when we talk about birth plans, we rarely ask the question: what does your doctor actually think about your birth plan?

After I found out I was pregnant, I scrolled through the birth plan checklists on the internet, wondering if I should make my own. I eventually decided against having a birth plan, because I was worried about how I'd feel if I made one and then broke it later. But I also couldn’t help but wonder: What do doctors think when they are handed a birth plan with so much detail, especially so much medical detail? Do they have to hold back the biggest eyeroll ever, to the point where they regularly get together and laugh at their patients' birth plans? I decided to find out for sure.

I spoke with two OB-GYNs: Dr. Amy Tuteur, a former clinical instructor at Harvard Medical School who has since left the medical field and blogs as the Skeptical OB, and Dr. Mary Jane Minkin, who practices at Yale New Haven Hospital. Both doctors had plenty to say when I asked them about birth plans, as well as a variety of experiences fielding reasonable requests — and outrageous ones.

Dr. Tuteur tells me that she thinks birth plans are “worse than useless,” likening them to making a weather plan on the day of your wedding. “There’s no way to know what's going to happen and your personal preferences have no impact on how things proceed,” she says, emphasizing that the process of labor and delivery is an unpredictable one, and that birth plans can sometimes create unrealistic expectations for soon-to-be mothers.

“The worst thing about birth plans is that they don’t work,” she says. “They don’t accomplish their purported purpose... and, ironically, predispose women to be less happy with the birth than women who didn’t have birth plans" in the event that the birth plan doesn't work out.

However, Dr. Tuteur adds that it’s absolutely important for women to share their preferences with their medical providers — as long as they understand that they are preferences, and not demands. She tells me that she’s received a lot of birth plans over the years, and that she’s always tried to comply when possible — but sometimes the requests were just too ridiculous. “The most outrageous request was to have the room in absolute darkness,” she says. “I pointed out that the only reason I was there was to intervene if there was a problem, and I wouldn't be able to tell if there was a problem if I couldn't see.”

Like Dr. Tuteur, Dr. Minkin tries to honor patients’ requests when they’re reasonable. But she believes that sometimes, birth plans contain details that interfere with best medical practices. One patient, she says, "had on her birth plan a request that I not offer her any pain relief during labor. I told her I just could not do that — she could certainly refuse to take any pain medication I offered, but I considered it unethical for a physician who sees a woman suffering not to offer her any pain relief.”

Dr. Minkin stressed that there should be a solid communication between the patient and the medical provider from the start — something that supersedes the plan itself. “I think the patient needs to be in a relationship where she trusts the provider,” she explains. “She should know that the provider will do what is in the best interests for her and her baby.”

"The patient should know that the provider will do what is in the best interests for her and her baby.”

Both doctors agreed that it’s crucial for pregnant women to voice their preferences and have an open dialogue with their health care providers. But there needs to be a middle ground between what you hope will happen and what actually happens in order to have the best medical outcome for both mother and child.

“Birth plans aren't a hassle for the staff in and of themselves," Tuteur tells Romper. "Most nurses, midwives, and obstetricians want to meet patient preferences. The big problem is that birth plans assume that the outcome of a healthy mother and healthy baby is a foregone conclusion and, therefore, focus entirely on process.”

The takeaway seems to be this: If drafting a birth plan feels like the right thing to do, then by all means, do it. It can help instill a sense of control in a process that is full of uncertainty and unpredictability, and that's certainly valuable. But it seems important for all pregnant women to understand that things might not go the way you want, and that you should be open to suggestions from our doctors. After all, the doctors are the professionals in the room, and they want what’s best for both us and our babies.