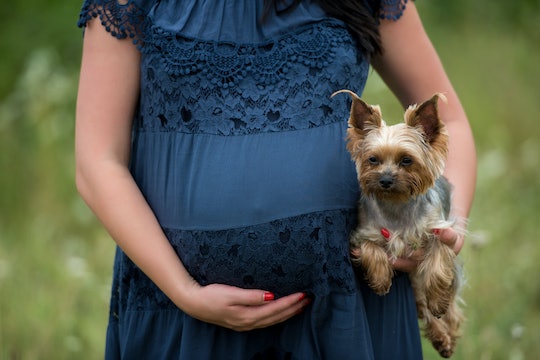 Going into labor is a huge moment for the mom-to-be and her closest friends and family. But the humans in the household aren't the only ones excited for the arrival of a baby. Learning what your dog is going through while you're in labor offers a fascinating look into the canine mind. Basically, it just provides more evidence that dogs are the best.

First, there's a fair bit of anecdotal evidence suggesting dogs can sense when humans go into labor. Just search for threads about the dogs predicting labor in your favorite parenting message board. Some dogs seem to get extra clingy or excited right before labor occurs, according to the stories in Baby Center's community. In fact, the canines sometimes appear to pick up on the cues before the humans know what's happening.

Is there any real evidence to back up these heartwarming tales? The dog's amazing nose could be the reason. It's kind of wild, but a dog's sense of smell is so intense, it's difficult for people to imagine. "Dogs' noses are specifically adapted to function much better than ours," said Michael T. Nappier, DVM, DABVP, of the Virginia Maryland College of Veterinary Medicine, in PetMD. "They have up to 300 million olfactory receptors in their noses, versus only about 6 million for us." Dogs basically experience the world in a totally different way with this supercharged sense of smell.

And this also means the family dog is tuned in to the pregnancy in a totally specific way. At the very least, a dog can smell the different hormonal changes that take place in the pregnant body, as Certified Dog Behavior Consultant Jennifer Shryock explained in Love To Know. The dog would also be able to smell the amniotic fluid when a woman's water breaks, as noted in How Stuff Works. So for the most part, labor symptoms will give your dog a bunch of new smells to experience, and the dog might react to these in a noticeable way.

In addition, your dog's skills of observation also come into play. Seriously, it's no coincidence your canine friend seems almost psychically connected with you from time to time. "Your dog is probably a far better observer than you are," said animal behaviorist Patricia McConnell. "We humans pay so much attention to language that it often interferes with our ability to see what’s happening around us." But because dogs are amazing at reading human facial expressions and body language, these subtle cues aren't going to slip by Fido. Your body might make some subtle change in movement when labor is near that only the dog notices, as explained in How Stuff Works.

Although there's so much guesswork with this question, it looks like dogs have specialized skills of observation and smell that might allow them to tell when something major is happening. Whether dogs actually understand labor is another question entirely. But for the most part, you can take heart knowing the family dog is so closely attuned to your every movement and action. Hopefully, that canine pal will stay by your side for all the exciting baby milestones that are ahead.