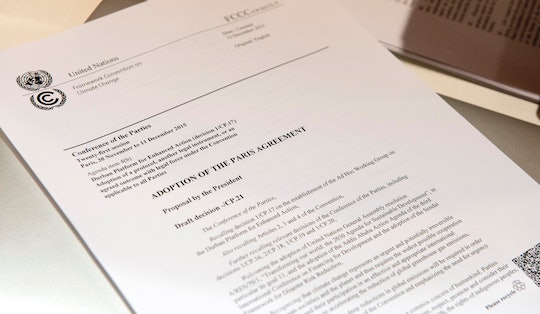 Here's What's In The Final Draft Of The Paris Climate Agreement

After two weeks of talks, it looks like the Paris climate change agreement is at last coming together. A final draft of the bill has been drafted and, later today, 196 delegates from as many countries will vote to reject or approve it. Then everyone has to go home and ask their home countries to approve it, too. That can be the tricky part.

(Update: The agreement was indeed adopted Saturday after nearly 200 countries signed on board. In Obama's words on Twitter, "This is huge.")

During the Clinton administration, the U.S. participated in Kyoto protocol, but never submitted it to Congress for approval. And already it looks like there might be some trouble getting the agreement past the House of Representatives, as it passed a bill this morning that would not allow the U.S. to cut greenhouse emissions via international agreements like this one. Come on, right?

But French Foreign Minister Laurent Fabius, the host of the talks, is still optimistic. According to the BBC, he said:

Today we are close to the final outcome. It is my deep conviction we have come up with an ambitious and balanced agreement ... Obviously, nobody will get 100 percent of what they want. What I hope is that everyone remembers the message of the first day, when 150 heads of state and government came from all around the world to say, 'The world needs a success.'

The final draft of the Paris Climate Agreement is lengthy and a little dense, but some of the key points are pretty straightforward:

It's actually not going to be easy to get it passed in various countries once the delegates sign in Paris, which it looks like they most likely will do. Advocates who are watching closely are a little torn about the provisions, whether they go far enough, and even on the validity of the science:

It's worth remembering that whoever wins in the 2016 presidential election will probably be on the hook for getting Congress to pass the legislation. Let's hope moderators in future debates don't forget to ask the candidates how they feel about the Paris Agreement.