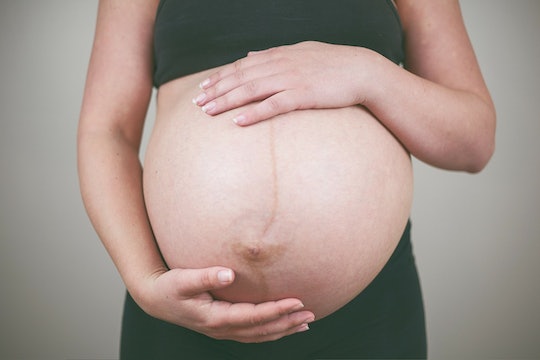 Here's When Linea Nigra Shows Up During Pregnancy

When you're pregnant, your body will go through lots of changes. Your hips will get wider, your feet may swell, and you'll probably notice hair in some places you've never grown hair before. And as your pregnancy progresses, you may also notice a mysterious line down the center of your belly that seems to be dividing you in half. If you've been wondering what that line — or linea nigra — is all about, then you may also want to know when the linea nigra shows up during pregnancy.

According to the American Pregnancy Association (APA), linea nigra, more commonly known as the pregnancy line, is a dark line that appears on your belly during pregnancy. The line begins at your navel and runs down to your pubic bone. And though the name implies that it's black, the linea nigra tends to be brown in color. The APA also noted that the line usually appears some time around the fifth month of your pregnancy. As your pregnancy progresses, your linea nigra will grow darker in color.

Although it may seem weird to you, the linea nigra is fairly common among expectant moms. As Fit Pregnancy mentioned, up to 75 percent of women see the linea nigra during their pregnancy. But what you may not know is that, as What To Expect noted, is that the line has always been on your belly. Before pregnancy, the same line is known as the linea albea (or "white line"). When you are pregnant, those same pesky pregnancy hormones that are responsible for the darkening of the areolas, causes your skin to become hyperpigmented.

But don't worry, you don't have to throw away all of your bikinis. Your linea nigra will never actually disappear, as the line will fade a few months after your baby is born, according to What To Expect. Additionally, Fit Pregnancy noted that you should avoid using bleaching creams to make the line disappear — particularly if you are pregnant or nursing, as they could be harmful to your baby. Instead, experts advise using lemon juice as a natural remedy for your hyperpigmentation. Or you could just look at the linea nigra as you earning your mommy stripes.