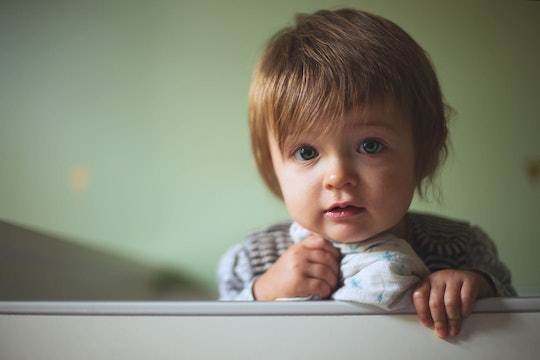 Here's When To Transition Baby From 2 Naps To 1 Nap

As babies get older, there will come a time when they no longer need to nap the day away. At about 9 months old, your baby will probably be napping just two times per day. But, like all things related to babies, the moment you get used to a particular nap schedule, your little one will start to show signs that it's time to change things up again. You may wonder when to transition bay from two naps to one nap.

In an interview with Parents magazine, Dr. Harvey Karp, author of The Happiest Baby Guide to Great Sleep, said that kids typically go from two naps to one sometime between ages 1 and 2. But, if that seems a little broad of a timeline, the Baby Sleep Site suggested that most kids drop their second nap sometime between 15 and 18 months. Kim West, a children's sleep therapist and coauthor of The Sleep Lady's Good Night, Sleep Tight said in the same Parents magazine article that once you see consistent changes in your child's sleep pattern for about two weeks – crankiness, longer time to fall asleep, refusal to take an afternoon nap – it may be time to transition down to one nap.

Amanda Hudye, founder of child sleep consultancy Sleep Well Baby, agreed, telling Today's Parent that you want to watch the changes in your child for a week to 10 days to be sure they're not related to a milestone, such as learning to walk, run, or making a big development with speech. One you begin the transition Hudye noted that it can take anywhere from a couple of weeks to a month to get your baby on a one-nap schedule.

You can start the transition by pushing the first nap of the day later in half-hour increments, waiting a few days in between so that your child can adjust. Do this until the morning nap is at around 11 a.m. or shortly after lunch. At this point, Hudye suggested getting rid of the afternoon nap and beginning an earlier bedtime routine. Remember that all kids are different, so it's important to be patient during this transitional period.