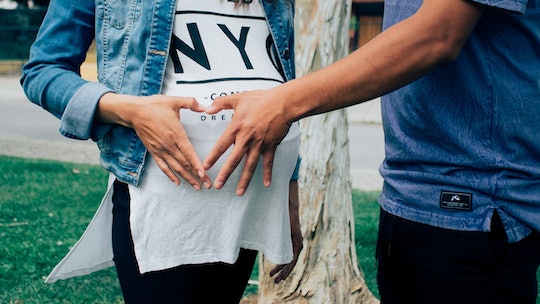 When To Expect Baby's Karate-Like Kicks

Feeling your baby kick for the first time is one of the most exciting parts of being pregnant. It's often the first time the pregnancy feels "real"— aside from the nausea and sickness in the beginning, of course. Feeling your baby kick is like a tiny, constant reminder that they're growing and thriving as they should, putting your worries to rest. If you're wondering when you'll feel baby's kicks for the first time, you're not alone. The first few months of pregnancy can drag by as you wait to feel those first flutters, but the good news is that you won't have to wait too long.

According to the American Pregnancy Association, most women feel the first feelings of "fluttering" (called "quickening",) from their baby at around 13 to 20 weeks. If it's your first pregnancy, you likely won't feel anything until closer to 18 or 20 weeks, because the feeling is easy to miss at first — like tiny butterflies or even digestion. However, if you've been pregnant before, you're more likely to notice it earlier on and differentiate between your baby's movements and other internal movements.

As your baby grows, the feelings will change from tiny flutters to full blown kicks — and yes, it feels as surreal as you imagine it will. According to What to Expect, around months five and six is when baby's movements equate to actual gymnastics in your womb. You'll be able to feel each and every movement from your little one, especially when you lay down to rest or sleep.

It takes a while for your baby to work up to those kicks though, so at first, you'll feel tiny movements that are less like kicks and more like flutters. No matter what, the feeling of your little one moving around is reaffirming, empowering, and exciting all at once — one of the best parts of pregnancy.

More Like This
41 Strong & Sweet Baby Boy Names That Start With “K”
The Best Black Friday 2022 Deals For Moms
“Operation Santa” Is Now Accepting Letters For The Big Man Himself
Yes, It’s Possible To Get Pregnant If You Have An IUD