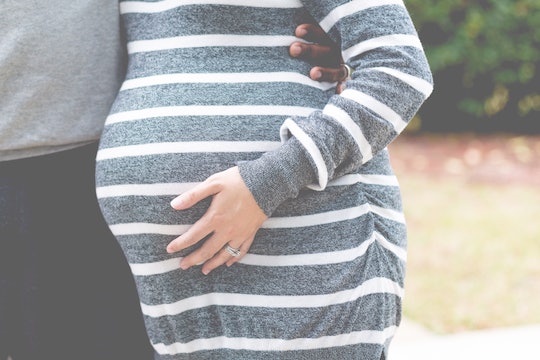 Feeling your baby's first signs of life is one of the most beautiful (and sometimes startling) aspects of pregnancy. It's only natural to wonder when your little one will start doing acrobatic tricks in your tummy. Like when you'll first feel your baby kick and what signs of movement you can look out for.

First, the usual caveat: every pregnancy is different, so your timeline may not match your cousin or your best friend. But in general, expectant mothers may feel the first stirrings of fetal movement around weeks 16 to 25 in your pregnancy, as noted by WebMD. And according to the American Pregnancy Association, these first movements (AKA quickening) may occur any time from week 12 to 25. This is a big window, and it may take longer than you like to really feel your baby squirm. Additionally, your ability to feel the baby kick may be impacted by everything from the placement of your placenta to the activity level of your developing child, according to What to Expect. In other words, there are a lot of variables in place.

Additionally, being able to tell when your baby is moving is something of a learned skill. As explained in Parents, those first kicks may just be slight flutters, and it's not uncommon to mistake them for hunger pangs or even indigestion. But in time you will come to know your baby's movements and patterns, and you may even get a sense of your baby's sleep cycles. As your pregnancy progresses, those little taps may begin to feel more like karate moves. For instance, as explained by the UT Southwestern Medical Center, the kicks and other fetal movements may become sharp and even startling in the later stages of pregnancy. You no longer have to second-guess anything, as you are obviously gestating a future soccer star.

The cool part is that, once you know what these movements feel like, then you know them for life. As noted in New Health Advisor, women who have been pregnant previously can often detect signs of fetal movement earlier in their subsequent pregnancies. By that point, you know how to differentiate a baby kick from a growly stomach.