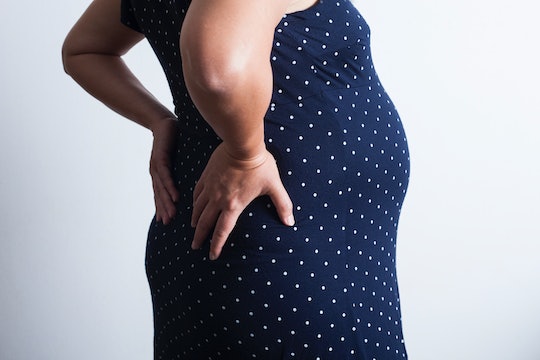 Here's When Your Boobs Will Get Bigger During Pregnancy

Your pre-baby breast size will most likely determine how you feel about adding more va-va-voom to your chest. My friends who are on the large busted side dreaded the extra boobage that came with pregnancy, while those who wore an A were excited about filling up a bigger cup. But no matter how you feel about changing breast size in pregnancy, it's happening. There's no stopping the hormone train which is responsible for breast growth. But no matter how you feel, you're likely wondering when your boobs will get bigger during pregnancy.

Well, according to Baby Center, your pregnancy boobs will start to show between six to eight weeks. It starts out as tenderness and sensitivity, which are your first inclinations that pregnancy related breast changes are beginning. Soon after that passes, you'll probably start to notice a slight increase in the size of your boobs. As James E. Ferguson II, M.D., professor and department chair of obstetrics and gynecology at the University of Virginia School of Medicine told Parents magazine, "the pregnancy hormones progesterone and human chorionic gonadotropin (hCG) cause an increase in blood volume, making breast tissue swell — possibly by as much as two cup sizes larger." But these changes happen at a different rate for everyone.

Although it's typical for your boobs to start growing in the first trimester, the rate at which the increase takes place can vary. According to What To Expect, some women don't notice breast changes until later in their pregnancy, and at times not until after the baby is born and the breasts engorge with milk. Although experts are unclear why breast changes can vary so much, their best guess is the amount of hormones each woman is producing. Either way, you'll want to be prepared.

Making accommodations for a bigger chest may be ongoing throughout the course of your pregnancy, so investing in a good bra will help you stay comfortable. As the website for the American Pregnancy Association suggested, look for a bra with good support and wide shoulder straps to accommodate your growing pregnancy boobs. Also, avoid underwire bras, opting for ones with a wide band under the cups instead.

Like so many other aspects of pregnancy, breast growth is unpredictable. But as you prepare for your pregnancy, it won't hurt to grab a few new bras to help make the journey a little more comfortable for the sisters.