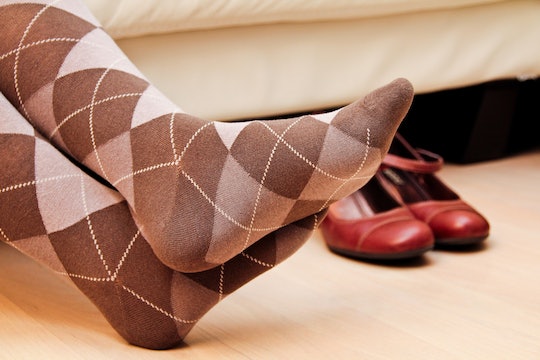 How To Explain Those Swollen Pregnancy Feet

A couple of weeks after I gave birth to my daughter, I got in the shower and happened to glance down at my legs and feet. I was shocked and horrified to see how shrunken they'd become almost overnight. For a moment, I thought something was wrong. But then I realized that they has swollen the the nth degree during my pregnancy. I realized then that I'd miss the moment when your feet start to swell up during pregnancy— I'd seen my legs getting rounder and felt my shoes getting uncomfortable, but I just thought it was where my 30 pound weight gain was landing. Oops.

Also known as edema, pregnancy swelling typically kicks in around the fifth month, according to the American Pregnancy Association. (That being said, it be can obviously occur earlier or later.) This happens because, at Fit Pregnancy noted, you have about 50 percent more blood and body fluids than normal when you're pregnant. As a result, your body might just decide to save some extra — especially when you're hot or you're a little dehydrated — which makes you puffy and swollen. If it's especially bad in your feet, you might find that your shoes don't quite fit right anymore. This explain why I could often be found traipsing around my office in flip-flips during the last trimester, despite the fact that it was freezing outside.

But edema doesn't just effect the feet, ankles, and legs. It can also cause your hands and face to swell up, which you may want to keep an eye on. If your swelling isn't going away, What to Expect noted that this can be a sign of preeclampsia.

Swelling during pregnancy definitely isn't fun, but Dr. Andree Gruslin told Today's Parent that most women "will experience it to some degree." You may notice it gets worse when you've been very active, so the Mayo Clinic suggested resting with your feet up to get some relief.

You should also make sure to drink plenty of water and try to limit your sodium intake as that can make swelling worse, according to Baby Center. And no matter how bad it gets, remember that once you give birth, it'll ease up — so don't throw away those too tight shoes.

More Like This
7 Things Pregnancy Dreams Can Mean If You're Not Pregnant
Yes, It’s Possible To Get Pregnant If You Have An IUD
Here’s What It Means If You Give Birth During A Solar Eclipse
41 Boy Names That Start With “G”