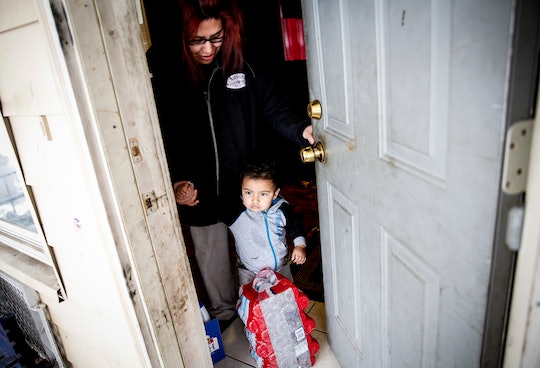 Over the last four decades, the number of children with high blood-lead levels has dropped dramatically. That's thanks in part to the phase-out of lead paint and lead-based gasoline by the mid-1980s. Yet, that doesn't mean that youth across the country are not at high risk of lead poisoning, as evidenced by the water contamination crisis in Flint, Michigan, four years ago. In fact, state and federal data show that kids are still being poisoned by lead in thousands of cities in the United States. But the statistics that are available may not even paint a complete picture of the problem.

In December 2016, Reuters published an extensive investigation that took a deep dive into blood-lead testing results in more than 3,800 neighborhoods across the country. And what Reuters found was nothing short of shocking: The childhood lead poisoning rates in some 1,300 areas were at least four times higher than the rates recorded during the peak of Flint's water crisis in 2014 and 2015. The Reuters investigation also showed that, in all of the 3,810 neighborhoods that the outlet identified, the overall rate of children who've tested positive for lead was at least double that of Flint's.

Among the cities that Reuters identified in its investigation is Cleveland, Ohio, where nearly half of the kids tested for lead in the last decade had high blood-lead levels, according to U.S. Centers for Disease Control and Prevention data analyzed by the outlet. And it doesn't seem that the rate of children exposed to lead has decreased by much since the 2016 investigation was published. New Ohio Department of Health data showed that the number of children in Cleveland who tested positive for lead poisoning was still about four times the national average, according to The Plain Dealer.

Other cities that have some of the highest childhood lead poisoning rates include, according to Essence and Reuters:

Getting this toxic substance out of our communities starts with removing and replacing lead in outdated water service lines, in buildings and on bridges. Until more federal and state funding to combat this problem is made available, like it finally was for those in Flint, the long-term health of millions of Americans and their children will continue to be put at risk.”

​But even in cities where the number of children poisoned by lead has dropped significantly, lead poisoning is still a major issue. In New York City, for example, the rate of kids who've tested positive for lead has plummeted by 70 percent since 2005, WNYC reported. But local public health experts claim that the city's Department of Health and Mental Hygiene undercounts the number of children exposed to lead because the agency uses an outdated measuring standard, according to WNYC.

In 2012, the CDC adjusted its threshold for high blood lead levels to 5 micrograms per deciliter. The old standard was at or above 10 micrograms. Although most cities follow the new thre

But any amount of lead can do damage, and have a tremendous negative impact on a child's health. Even low blood lead levels can have "subtle but important neurological deficits," David Rosner, professor at Columbia University’s Mailman School of Public Health, told WNYC. Low lead exposure can lead to a decreased IQ, poor academic performance, and a lack of impulse control, Rosner said.

Whether it's Cleveland or New York City, cities need to change the way they tackle the lead poisoning problem. As Rosner told WNYC:

We’ll continue to act as if it’s the kid’s problems and we’ll address it by blaming the children, rather than understanding that we as a society have created the conditions that are poisoning these children.