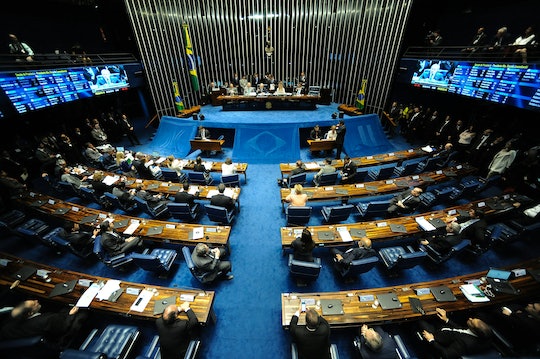 Vaccination is a hot-button issue. In fact, many tense at the very mention of the word. Because vaccination — specifically, mandatory vaccination — is one of those rare topics in which almost everyone holds a strong opinion — you are either for vaccination or against it. And while I admittedly fall into the former category, the intention of this article is not to change anyone’s mind, or to argue facts. Instead, I simply want to turn the spotlight on several U.S. elected officials. Which current United States governors, senators, and representatives support vaccination, and which ones do not?

Candidates & Elected Officials Who Support Mandatory Vaccinations For All

According to On The Issues, Former Sec. of State and 2016 Democratic Presidential candidate Hillary Clinton made her stance on vaccination known when, earlier this year, she said "the science is clear: The earth is round, the sky is blue, and vaccines work." And her rival, Sen. Bernie Sanders, echoed a similar sentiment. In fact, according Feel The Bern, Sanders believes vaccinations are safe and effective, and that electing not to vaccinate is dangerous and wrong:

I think obviously vaccinations work. Vaccination has worked for many, many years. I am sensitive to the fact that there are some families who disagree but the difficulty is if I have a kid who is suffering from an illness who is subjected to a kid who walks into a room without vaccines that could kill that child and that's wrong.

According to On The Issues, other government officials who support vaccination include Sen. Marco Rubio:

Gov. Jeb Bush made his position on vaccination very clear when he gave a speech at the Detroit Economic Club, according to The Huffington Post:

And Louisiana Gov. Bobby Jindal stressed the importance of vaccinations in a 2015 statement when he said he had “no reservations about whether or not it is a good idea and desirable for all children to be vaccinated," according to The Huffington Post.

I urge every parent to get them. Every one.

2016 Republican Presidential candidate and business mogul Donald Trump supports mandatory vaccinations, but believes smaller doses should be given, according to On The Issue:

Autism has become an epidemic. It has gotten totally out of control. I am totally in favor of vaccines. But I want smaller doses over a longer period of time. You take this little baby, and you pump--I mean, it looks like it's meant for a horse, not for a child. Just the other day, a 2-year-old child went to have the vaccine, and got a fever; now is autistic. I'm in favor of vaccines, do them over a longer period of time, same amount.

Like Trump, Sen. Rand Paul believe vaccines work; however, when pressed for additional comments about vaccination in 2015, on the Laura Ingraham show, Paul did add that he does not believe that all vaccines should be mandatory:

I am not anti-vaccine at all...[but] I think there are times in which there can be some rules, but for the most part it ought to be voluntary.

And, according to On The Issue, Gov. Greg Abbott holds a similar position:

[Abbott] supports current Texas law that he believes strikes the right balance of requiring vaccinations while still allowing parents to opt out under certain circumstances.

However, Gov. Chris Christie's stance on vaccination is a bit more ambiguous. In February 2015, the New Jersey governor stated parents should "have some measure of choice" when it comes to immunizations and vaccinating children; however, according to Bloomberg, Christie quickly changed his tune, and his office issued a statement to clarify his remarks less than two months later:

The governor believes vaccines are an important public health protection and with a disease like measles there is no question kids should be vaccinated.

Candidates & Elected Officials Who Do NOT Support Mandatory Vaccinations

Why do we inoculate people with vaccines in public schools? Because we're afraid of those diseases being communicable between people at school...[t]his is big government run amok. It is bad policy, and it should not have been done.

And, according to I Side With, 2016 Libertarian Presidential candidate Gary Johnson does not support mandatory vaccinations nor does he believe the government should play any part in making this parental decision.

Of course, there are dozens — hell, hundreds — of governors, senators, and representatives this article does not mention, but this article was not written to be a compendium. (It couldn't be.) However, it was written to initiate thoughtful discussion. It was written to point out that, no matter where you stand on the subject of mandatory vaccination, there is — more likely than not — a candidate which can, and will, support your beliefs (sometimes against all scientific evidence).