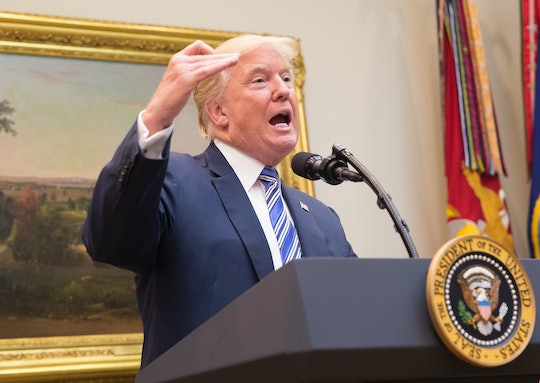 Here's Who Experts Think Trump Could Fire Next

Sally Yates. Preet Bharara. James Comey. Sam Nunberg. Reince Priebus. Anthony "The Mooch" Scaramucci. What's the one thing all those people have in common? President Donald Trump has fired them all within the first seven months of his presidency. And here's who Trump could fire next: special counsel Robert Mueller, who is leading the Russia investigation. Only thing is, the rules aren't as clear cut.

Trump has been as subtle as a brick through a window about his desire to see Mueller ousted. The president told New York Times reporters last month it would be out of bounds for the special counsel to probe Trump's businesses. When asked if he'd fire Mueller for crossing that line, Trump said he couldn't answer because he didn't think that would happen. Yet it did: On July 20, Bloomberg reported that the special counsel expanded his investigation in Russia's alleged election interference to include Trump's business transactions. Needless to say, the president has called for Mueller's head.

It's not that easy to get rid of him, though. According to Politico, the office of the attorney general has the authority to remove special counsel, but only for "good cause," as written in the Code of Federal Regulations. But Deputy Attorney General Rod Rosenstein hasn't seen any reason to do so.

Rosenstein, as you may remember, has taken over for Attorney General Jeff Sessions on anything related to Mueller and his probe into the Russia connection. (On Thursday, Mueller impaneled a grand jury and issued subpoenas, according to Salon.) That's because, back in March, Sessions had recused himself from anything to do with the 2016 presidential election at the recommendation of ethics officials with the Justice Department, according to the Washington Post.

But here's the thing: Sessions isn't safe. Trump has also made it clear that he's unhappy with Sessions' performance as attorney general — namely for removing himself from the Russia probe and for being "very weak" on former Secretary of State Hillary Clinton, the Post reported. It's unclear if Trump would actually fire Sessions. But, according to Politico, if the president does, there's a high chance he could fill that vacancy without having to go through the Senate confirmation process. And that new attorney general could go ahead and fire Mueller.

The frightening part about that is it's a tangible possibility. So much so that senators have introduced two pieces of legislation to protect Mueller from being let go without cause, according to NPR. In other words: Trump has abused his power so much since being in office that lawmakers are trying to preempt further abuses.

What has this administration become?