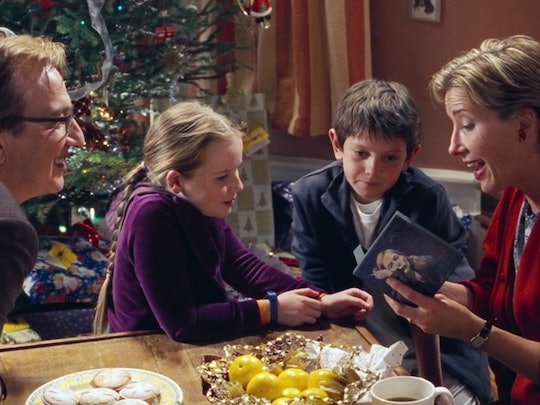 Today is a sad day for film, theater, and the world. Alan Rickman, the inimitable actor, died Thursday morning at age 69. He had an impressively varied career, including some roles so memorable they can only be called iconic. From Hans Gruber to Snape, he was the villain we loved to hate, and it was the subtlety with which he handled such complex characters that made him great. In another iconic moment, he played Harry in the fractured 2003 Christmas classic, Love Actually. Here's why Alan Rickman's portrayal of cheating in Love Actually was just perfect.

What's amazing about Rickman's treatment is that he plays Harry as a completely likable character. One of viewers' first impressions of him is this endearing conversation with his employee, Sarah:

Harry: Tell me, exactly, how long it is that you've been working here?

Harry: And how long have you been in love with Karl, our enigmatic chief designer?

Harry: I thought as much.

He's a good friend. He has a sense of humor. But he becomes, frankly, detestable for cheating on none other than Emma Thompson (who does that?), but even as it is happening it's hard to hate him or even blame him. He's such a bumbling, bespectacled dad figure that it's much easier to blame his temptress secretary. The director seemed to want to underscore that point by putting Harry, for one scene, alongside Mr. Bean. Even in a conversation with the original bumbler extraordinaire himself, Harry comes out looking more foolish. Harry seems to have stumbled into the whole mess of cheating unthinkingly and because of that he seems more worthy of our pity than our disdain.

Unlike so many previous portrayals of adultery, what sets this one apart is how unappealing Rickman makes it look. In classic subversive fashion, he does not play a philanderer in the true sense of the word. He doesn't make cheating look exciting, thrilling, or sexy. He doesn't look for it at all, really. In fact, Rickman makes cheating look painful, terrible, and full of regret, which, though heavy for a Christmas flick, is much closer to the truth. Even though he is a man and the boss, he is the one cornered and squirming.

Am I saying he didn't play a hand? Of course not. No one is blameless except, sadly, Emma Thompson's character, who may be the most endearing and identifiable of the cast. Despite her goodness as a friend and willingness to make papier-mache octopi, no matter how many arms, she could never have a happy ending. That is the tragedy of this spoke of the Love Actually plot wheel: bad things happen to good people.

Regardless of Love Actually's flaws, Rickman and Thompson's onscreen tension elevates the complexity and mastery in the film to a level it almost doesn't deserve. It speaks volumes that even in a rom-com Christmas movie (star-studded as it may be), Rickman shines. No matter how big his role or how serious his lines, he always used them as an opportunity to explore what it truly means to be human. For that, and so much else, he will be sorely missed.