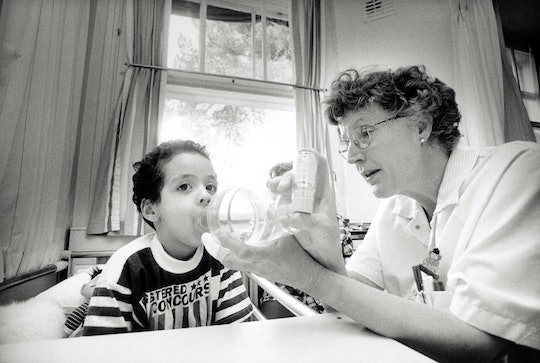 Here’s Why Asthma Rates Are Rising In The US

As the spring season bursts into full bloom across the United States, plenty of allergy and asthma sufferers are feeling the brunt of pollen overload as they head outdoors. The number of people suffering from asthma has increased significantly over the years, but figuring out why asthma rates are rising in the United States has been a complicated question for scientists and public health researchers to try and answer with a definitive cause.

Asthma affects 7.6 percent of all Americans as of 2015, according to the Centers for Disease Control and Prevention. Among children ages 0 to 18 years, the national asthma rate is actually higher, affecting 8.4 percent of children. In the decade from 2001 to 2011, asthma rates rose by as much as 28 percent, according to the CDC. But then in 2015, the overall rate of childhood asthma held steady rather than rising. Even so, the number of Americans suffering from asthma holds at a staggering rate of 1 in 12 people.

Even with both rises and plateaus in asthma rates, there still isn't one single cause accounting for the increases in asthma diagnoses — but there are several leading theories.

One of the particularly interesting theories for why asthma rates are rising is due to the fact that humans have become "too clean." Dubbed the "hygiene hypothesis," asthma rate increases could be caused by the fact that children simply aren't being exposed to as many germs as they have in the past, leaving their immune systems vulnerable to developing asthma.

Oddly enough, it's the Amish that seem to prove out this hypothesis: Amish children rarely have asthma compared to peers their age in the general population. The science behind the theory is that they are exposed to far more germs, giving their immune systems the boost needed to fend off asthma.

In 2016, the World Health Organization released new data showing that global air pollution rates were on the rise at unprecedented levels, by as much as 8 percent. Air pollution is a known asthma trigger, worsening symptoms for asthmatics as soon as they walk out their own front doors. As an asthmatic who also happens to suffer from seasonal allergies, checking the air quality report when I get up first thing in the morning is a vital part of my daily routine.

Researchers have found a strong link between weight and asthma. People with a BMI greater than 30 are more likely to develop asthma. Some researchers theorize the physical condition of a person's body causes added stress and constriction on the respiratory system. The American Lung Association also notes that the link between asthma and weight is far more subtle, as asthma could be influenced by systemic inflammation associated with obesity.

The Rise Of C-Section Rates

The rate of C-sections has been rising in the United States, and while it's important to point out that correlation does not equal causation, recent research has revealed that it may be linked to rising asthma rates as well. A 2015 meta-analysis on C-section and childhood health outcomes found 23 studies showing a connection between C-section births and asthma rates.

Speaking as someone who knows just how debilitating asthma can be on a daily basis, the fact that asthma rates are on the rise is especially concerning — and it's important to pin down the causes and address them as best we can, because no one should have to fight for every breath.