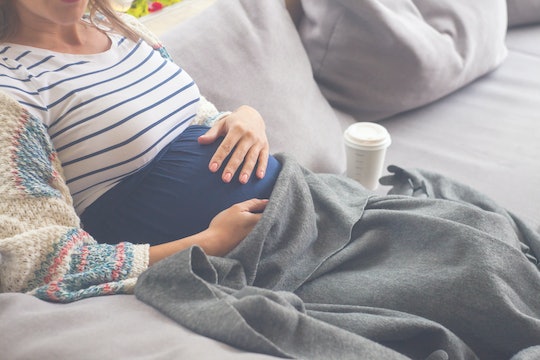 Here's Why Can't You Drink Coffee When You're Pregnant, According To Experts

If you're anything like me, the lovely thought of pregnancy comes with a side of fear. Yes, I'm afraid of labor and delivery and the rest of those normal pregnancy fears, but what terrifies me the most is the thought of having to give up my daily cup of coffee for the better part of nine months. I think it's been 10 years since I've gone more than one day, maybe, without a caffeine fix. So why can't you drink coffee when you're pregnant? Well, it's kind of complicated, but rest assured, soon-to-be moms: it's not to drive you insane. There are more than a few reasons why you should avoid consuming a large amount of caffeine, including your baby's health.

Unfortunately, drinking more than 200 mg of caffeine a day when you're pregnant has been linked to miscarriage and low birth weight, according to BabyCenter. Drinking a whole lot of caffeine, like up to eight cups a day, has been linked to stillbirths, too. Those possibilities are obviously much, much worse than having to give up your coffee habit for 40 (more or less) weeks.

Parenting Magazine explains a few other potential harmful side effects from drinking too much caffeine while pregnant, saying:

"As it does in adults, caffeine can increase a baby's heart rate. Also, because a fetus' immature liver can't rid itself of the caffeine as quickly as an adult liver, the caffeine may remain in the fetus' bloodstream longer, and at higher levels. A further caution is that caffeine has similar metabolic effects as the stress hormone adrenaline; both can theoretically reduce blood flow to the uterus."

So now that you know why you need to limit your caffeine intake when you're growing another human being inside your body, let's look at how much caffeine is safe to drink while pregnant. According to the American Pregnancy Association (APA), up to 200 mg of caffeine is safe to consume during pregnancy. But how much is 200 mg of caffeine when it comes to a cup of coffee? It's about the same amount as a 12 ounce coffee from Starbucks, although this will vary with the coffee shop and strength of the brew. In other words, don't try to drink 12 ounces of espresso! But overall, if you're the type to only drink one coffee a day, you're in luck. If you're used to several cups of coffee a day, however, you'll want to come up with another alternative to your caffeine habit.

If your typical caffeine level is higher than 200 mg a day, and you think going cold turkey will be too tough or give you a withdrawal headache (something I get if I skip the single cup I drink every day!), consider weaning yourself down to a safer level of caffeine slowly.

For starters, The Mayo Clinic says you could switch to tea, which logs only 26 mg of caffeine per cup. Or you could switch to decaf coffee, which typically has more like 18-30 mg of caffeine per cup. Most sodas have about 30mg of caffeine or less, according to The Mayo Clinic, so those would be a better bet than several cups of coffee as well. And according to BabyCenter, "If you need a caffeine boost but are concerned about your intake, you might choose a latte (about 75 mg of caffeine). From the milk in a latte you'll get a little extra calcium and protein — nutrients you need during pregnancy anyway." So a little bonus nutrition with you caffeine which, you know, is the dream!