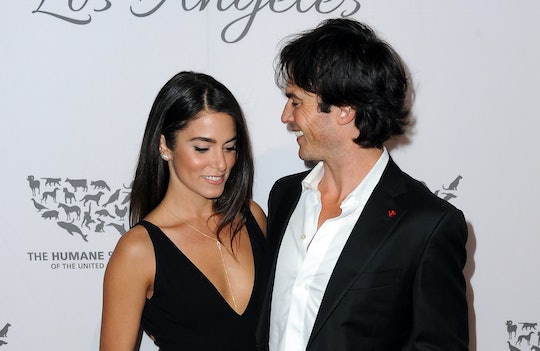 Actress and activist Nikki Reed is expecting her first child sometime this month — but don't expect to hear much from her or her husband, Ian Somerhalder, for a good while after the baby is born. Reed and Somerhalder are taking a "month of silence" after the baby's birth, Reed recently told Fit Pregnancy, and the duo have a pretty great reason for taking a 30-day communication break.

Just the three of us, no visitors, and we’re turning off our phones too, so there’s no expectation for us to communicate. Otherwise, every five minutes it would be, ‘How are you feeling? Can we have a picture?’ You don’t get those first 30 days back, and we want to be fully present.

The idea makes perfect sense. After all, parents are generally advised to make resting a priority, keep non-baby-related tasks to a minimum, and simply work on caring for themselves and their baby after birth. Trying to make everyone else happy is hard enough for anyone — let alone for two well-known celebrities and entrepreneurs like Somerhalder and Reed.

Reed doesn't seem too worried about the reaction she'll receive from the public, either — for her month of silence or anything else. "Being pregnant gave me instant perspective," she told Fit Pregnancy. "Pregnancy is the moment you find your path and do what you want, when you want, how you want."

It seems like Somerhalder and Reed will also enjoy the privacy that comes with a month of silence. Before announcing that they were expecting on Instagram, the duo kept Reed's pregnancy under wraps for quite some time. "This has been the most special time of our lives and we wanted to keep it between the three of us for as long as possible so we could enjoy this time with each other and our little one who is growing so fast," Somerhalder wrote on his Instagram post announcing Reed's pregnancy. "Because that's what they do, they grow so fast."

In her interview with Fit Pregnancy, Reed addressed their long wait time before making a formal announcement as well — and guess what? It wasn't only the media that found out late in the game. "We waited months to tell even friends and family that we were expecting," Reed said. "It started out with us not knowing how long we’d keep it private. Then it started to feel like we had this really cool thing, a secret with just each other."

I have a feeling their "month of silence" after their baby's birth will feel just as special. Then maybe (hopefully) after that, we'll get to see some pictures of their little fast-growing peanut.