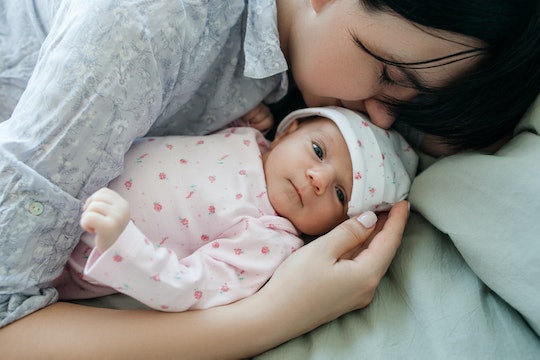 When You Have Regrets About Becoming A Mom

Motherhood is often said to be the most rewarding job in the world, but for some mothers it can be a source of regret — grief for the life that they have lost and misgivings about their parenting skills. Worse still, that regret is something we aren't typically happy talking about as a society. Whether you always knew you wanted to have children or were undecided until you saw those two lines on the positive test, motherhood is without a doubt one of the most life-changing experiences a woman can go through. One minute you’re living your life solely for you, with the biggest decisions you face on the reg being whether to go out on a Friday night or stay in with your Netflix queue lined up, and the next you’re breaking down in hysterics because you have zero idea why your baby is crying or what on Earth will get him to pipe down and fall asleep.

The only idea of motherhood I had was the rosy picture painted in movies and in magazines — babies peacefully cooing in their cots while mothers keep doing things they've always done.

While there’s often a lot of shame that comes with experiencing negative feelings about motherhood, that’s certainly not to say they’re not alive and kicking. And regret is no exception. In fact, experts agree that it’s perfectly natural for all moms to feel an occasional tinge of momentary regret about having children — especially when they’re overwhelmed, exhausted, or in the thick of a power struggle with their kid.

An estimated 50 percent of pregnancies are unplanned, per the CDC, which means most women are not prepared for motherhood when they became pregnant, or perhaps were never planning on it. But, as Fran Walfish, Psy.D., Beverly Hills family and relationship psychotherapist and author of The Self-Aware Parent, points out, there’s another small percentage of mothers who deep down inside really knew from the start, before conceiving, that they would not make a good mother and honestly did not want children.

Antonina, mom of one from the U.K., understands this all too well and knows she can’t be alone in feeling parenting regret at certain points.

“I'm an only child and I didn't have many children around me growing up, so the only idea of motherhood I had was the rosy picture painted in movies and in magazines — babies peacefully cooing in their cots while mothers keep doing things they've always done,” she tells Romper. “I pictured myself being this super mom, working in my brand-new home office while my baby peacefully played on the floor next to me and even taking him to work meetings with him sleeping in my sling.”

No prizes for guessing that her reality, like many others who came before and after Antonina, couldn't be further from that idyllic image.

“My child didn't sleep longer than 2-3 hour stretches for over two years, always wanted to be with me or on me and my back hurt so much I couldn't even use the sling and was exhausted to the point of tears,” she says.

These feelings are in part the result of the overwhelming changes and challenges your body goes through, from fluctuating and sometimes skyrocketing hormone levels, to little-to-no sleep on an ongoing basis, all grouped together with a whole host of new responsibilities and worries.

But, for some women, this sense of regret stems from wavering confidence or lack of support, Stephanie O’Leary, Psy.D., NYS clinical psychologist, parenting expert and author of Parenting in the Real World, explains.

“The dynamic is more intense if friends or family members are critical and judgmental, leading a new mother to call into question her every decision regarding her child,” she tells Romper.

For others moms, the sense of regret can reflect underlying issues related to anxiety or depression that can make it hard to get through a typical day, much less a day with the added stress or responsibilities of caring for an infant.

If you or someone you know might be battling feelings that feel foreign to motherhood, even harboring feelings of regret over becoming a mother, experts recommend first taking a painful, honest look within. “The best thing a woman in this situation can do is acknowledge her feelings first 'silently' to herself,” explains Dr. Walfish. “Ask yourself if you were so terribly mishandled as a child that you never wanted to be a parent in the first place.”

These emotions only become powerful when we allow them to build up inside without expelling some of their steam.

Next, the best thing to do is to talk about those feelings, whether it’s with your spouse, a friend, clergy member, a counselor or a therapist — confiding in someone you can trust and not bottling up your feelings prevents them from growing in size.

“These emotions only become powerful when we allow them to build up inside without expelling some of their steam,” says Dr. Walfish. Her recommendation is to reach out to a well-trained, trustworthy professional child and parenting psychologist with whom you can talk about and process those important emotions.

Lastly, notice when these regretful feelings start coming to the surface. “If it's only during stressful moments, you can probably relax,” Dr. Walfish says. “But, if you feel regret about having children virtually all the time, you may be one of those moms who might have known something innately about herself from the get-go.”

No matter the contours of your own regret, therapy and self-awareness can help, so don’t hesitate to seek professional help if you’re feeling lost. Our babies come into the world screaming, and it's easy to forget that mothers also go through an incredible transition at the same time. What they need is for society to realize that the feelings themselves aren't the problem; a lack of support is.

More Like This
Advice For Rihanna On Having A Baby In This Country, From One Black Mom To Another
These 4 Sleeping Positions Will Keep You Comfortable After A C-Section
Here's The Best Time To Remove Your C-Section Tape
Breaking Down The Different Types Of Postpartum Infections