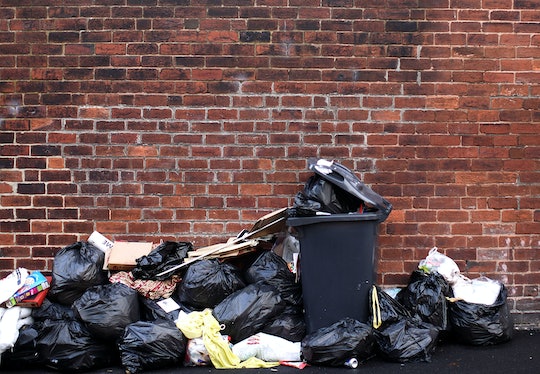 I'll be honest: I am bad friend to the environment. I used to own a hybrid car but traded it in for a gas guzzler. I drink out of reusable water bottles, but I also buy Starbucks often. But, because of my shortcomings, I want my son to be a better friend to the environment than his parents. In order to ensure that, though, I have to think about the things I give him — like why juice boxes are a huge environmental problem. Turns out, the material makes them hard to recycle.

According to PBS Kids (my toddler's favorite channel), the composite packaging of most juice boxes contains three to six layers of paper, polyethyiene plastic, and aluminum. Paper makes up the bulk of the container at 75 percent, while plastic accounts for 20 percent, and aluminum for 5 percent. This composite packaging preserves the juice inside so that it has a long shelf life.

But a juice box container takes a long, long time to disintegrate — 300 years to be exact, according to PBS Kids. That means that the box for that 100 percent apple juice your child drank with lunch will outlive you, your kid, their kids, and their grand kids.

Actually, it could take even longer than three centuries. According to Slate, plastic can take between 500 to 1,000 years to decompose. That's a lot of time to do damage to the environment. As Scientific American noted, plastic is laced with chemicals that can have harmful effects on the earth and the human body. Plastic waste can hurt or poison wildlife, help invasive species to destroy habitats, and cause harmful chemicals to leak into groundwater.

There are other ways that juice boxes are bad for the environment. According to PBS Kids, it is possible to recycle some juice boxes through a process called hydro-pulping. Hydro-pulping allows the paper to be separated from the plastic and aluminum; the materials, in turn, can be reused to make lower-quality items like toilet paper. But not many cities in the United States have hydro-pulping machines to operate. Regions that do accept juice boxes for recycling end up shipping them to other country to be hydro-pulped. And, as PBS Kids points out, shipping means using extra resources that hurt the environment, like gasoline.

One way to solve the issue is through edible packaging. According to the Seattle Times, a growing number of companies are trying to turn food waste into edible packaging. It's a solution that may be a long way off, but if it could help solve juice boxes' environmental problem, I'm all for it.