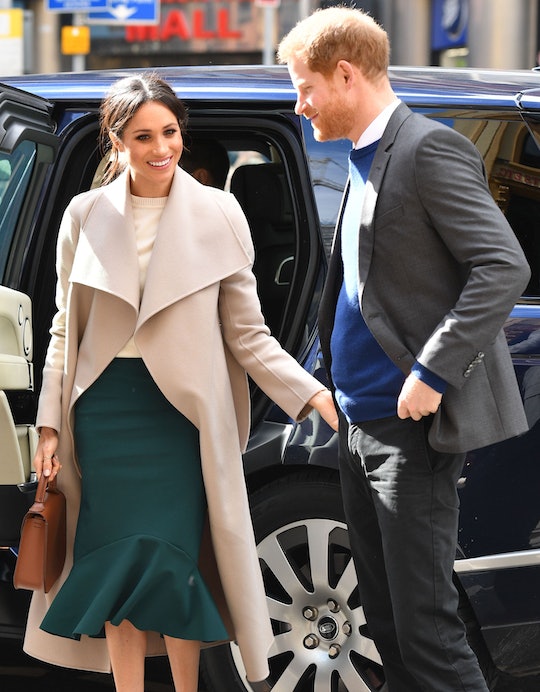 Preparing for a wedding day is stressful for anyone. Thanks to all of the organizing, reviewing, and planning that has to be done before one of the biggest events in your lifetime, the last few weeks can be a bit hectic. Understandably, that's why you won't see Prince Harry or Meghan Markle until their wedding day.

People reported on Tuesday that the couple will not appear any official capacity until their wedding day on May 19. They do not have any public duties or outings scheduled for the next three weeks, though they do have briefings, visits, and meetings, all of which have been scheduled privately, according to Kensington Palace's public engagement schedule.

Harper's Bazaar reported on Sunday that the break is likely to give them time to prepare for their upcoming nuptials, and it's well-deserved: the report also stated that throughout the last month, they were frequently seen out for royal duties as well as other events and charitable occasions on behalf of the royal family. The last event where they were seen together publicly was the Anzac Day service at Hyde Park, just before they visited their new nephew, Prince Louis, according to Hello!.

Harry and Meghan started dating officially in October 2016, and they got engaged in the fall of the following year. A year after they officially got together, Meghan explained their relationship in an interview with Vanity Fair, saying: "We're two people who are really happy and in love." She continued:

We were very quietly dating for about six months before it became news, and I was working during that whole time, and the only thing that changed was people's perception. Nothing about me changed. I'm still the same person that I am, and I've never defined myself by my relationship.

In an interview they did with the BBC after the engagement, both Harry and Meghan shared that they are excited to start their lives together, and that they feel they are a strong couple who will have a lot of impact on the world. Meghan told the BBC:

What's been really exciting as we talk about the transition into the role is the causes that have been really important to me, I can focus even more energy on... when you realize that you have access, or a voice, that people will listen to, that comes with a lot of responsibility.

Harry echoed the sentiment that there is a lot to do, especially since Meghan is retiring from acting, moving to a new country, and beginning a new marriage. "It's a new chapter," Meghan told the BBC.

In the same interview, Meghan explained that though a lot is changing, she is staying true to who she is as a person. "We were very quietly dating for about six months before it became news, and I was working during that whole time, and the only thing that changed was people's perception," she told the BBC. "Nothing about me changed. I'm still the same person that I am, and I've never defined myself by my relationship."

Prince Harry agreed that though their relationship went quickly (they were together for a year and a half before getting engaged) he doesn't see that as a bad thing. "The fact that I fell in love with Meghan so incredibly quickly is confirmation to me that all the stars are aligned," he told BBC. Now, as the two prepare for their wedding in a couple of weeks, it seems they're taking a little bit of time to get back to their roots, perhaps spend some time alone, and get ready for this huge and exciting time in their lives.