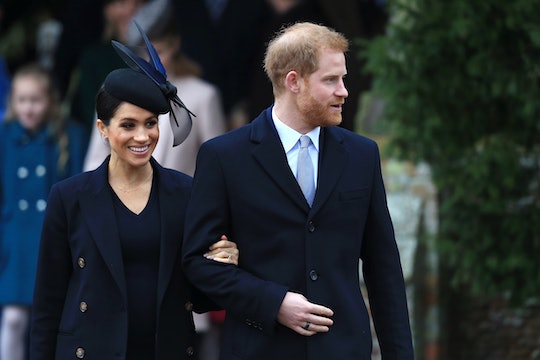 When it comes to pregnancy, body positivity is never more important, because it's also never more challenging. This is true even if your every move, day and outfit isn't being documented, but even more poignant when it is. And Meghan Markle's latest pregnancy look was a body positive win, and there's a really inspiring reason why.

It dates back to an interview Markle did with Glamour in the spring of 2017. While speaking with the magazine, she opened up about a fashion trend that she really likes, but didn't think she could try. “What I’m starting to learn is, even though things look amazing on the hanger, it doesn’t mean they’re going to look amazing on me,” she told Glamour at the time. “For example, I love Victoria Beckham dresses, but I don’t have the long torso to support that silhouette."

However, as People reported today, Markle overcame her perception that she didn't have the torso to "support" that kind of style, and wore that exact kind of dress to Christmas services with the royal family.

This is important not only because Markle is reminding us all that there's no such thing as clothes you "can and cannot" wear, only what you would and wouldn't prefer. At a time when your body is rapidly changing and drawing more attention than ever, this is really important to remember.

This isn't just a moment to celebrate for Markle, though it is inspiring that she has put aside her past reservations regarding whether or not she feels can or cannot wear a certain style, particularly during pregnancy. It's also a really important reminder for everyone, pregnant or not (and, ahem, royal or not) that you can wear what you want, when you want, as you want, and how your body does or doesn't look shouldn't hinder your taste, style or enjoyment of clothing.

However, this is certainly easier said than done, particularly during pregnancy. According to the Office on Women's Health, pregnancy can either intensify pre-existing issues with body image or self-esteem, or even create some that weren't previously there.

"During pregnancy, your body goes through several changes, including weight gain. Hormonal changes will cause your stomach and breasts to get larger as the baby grows and your body prepares for breastfeeding. You might develop stretch marks where your body gets larger," the OWH noted. "Sometimes your skin will break out with acne. You may also be much more tired than usual and have mood swings more often. A negative mood may make you more likely to have unhealthy or negative thoughts about your body."

However, there are many ways to combat feelings of self-doubt or inadequacy. According to Fit Pregnancy, some things women can do are to first educate themselves on the reality of how much their bodies are going to change throughout pregnancy, to not be so hard on themselves for not adapting seamlessly, and to hire a professional counselor if need-be.

Mostly, though, it's keeping in mind that the rigorous and unrealistic standards placed on women throughout their lives are often particularly pronounced during pregnancy, when bodies are not only changing rapidly, but often very much on display. No matter where you fall on the spectrum of self-confidence, allowing yourself to take up space, honoring your body for what it's doing, and wearing whatever dress you please are all steps in the right direction. Take it from Duchess Meghan Markle herself.