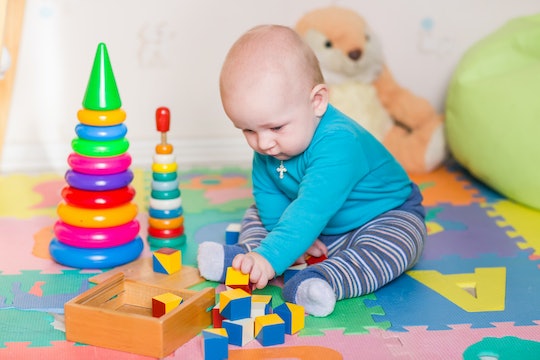 The line between little girls and little boys has been drawn thick and carved deep for pretty much as long as there have been little girls and little boys. The differences between them are assumed to be entrenched, inherent — whether that means the assumption that girls naturally gravitate toward wearing skirts and playing peacemaker or that boys by default display aggression and a lack of emotional control. Society is quick to label anyone who falls outside of that pink/blue binary as an "other" — and such stereotypes take root in kids' psyches early and can haunt them for a lifetime. But the fact that these are stereotypes — nothing more — is exactly why parents shouldn't allow a baby's sex to define them.

Oftentimes, a baby's assigned sex at birth is the first concrete thing moms and dads learn about their babies. Long before anyone knows whether a baby will be right-handed or left-handed, grow up to excel at playing the piano or basketball — indeed, months before they are even born — new parents get their first insight into what the child's life may look like by finding out what anatomy they have. But, as it turns out, that little nugget of info doesn't actually tell parents much at all.

In fact, there are "very, very few differences in cognition and behavior," between males and females, University of Kentucky psychology professor Christia Spears Brown recently told NBC News' Lisa Selin Davis. Brown considers newborns to be blank slates, and says research supports the idea that the gender differences that eventually emerge among babies are pretty much entirely dictated by cultural stereotypes.

This is exactly why many believe that making assumptions about what a kid will be like based on their anatomy is a grave mistake. One recent study found that societal beliefs about what males and females are and should be — like the idea that girls (assigned female at birth) need to be protected while boys (assigned male at birth) should be strong and independent — harms both of them, USA Today reported. The social manifestation of such beliefs about genders based on sexual characteristics could result in depression and exposure to violence in girls and higher instances of substance abuse and suicide in boys, the study found.

And then there are gender nonconforming people to whom such baseless, nonbiological gender stereotypes can be especially harmful. Lee-Anne Lawrance, who identifies as non-binary, recently described the experience of being raised as the gender that assigned with their sex at birth — with which they did not fully identify — as "stressful and painful," according to The Independent:

Constantly being told I am something I am not, that other people knew me better than I knew myself, has definitely affected my mental health. Imagine if the whole world repeatedly told you you had blue hair and you knew you didn't, imagine growing up with that.

But what's the solution? Some parents are choosing to raise their children as gender-neutral, which can mean different things to different families. In some instances all this means is allowing kids to play with toys commonly associated with any gender, avoiding decorating their rooms in ways that overtly signal "masculine" or "feminine," and letting them decide on their own what they want to wear, according to Parents magazine. And some parents have even gone so far as to conceal what sex their kids were assigned at birth from family, friends, and the outside world completely.

Short of declaring your parenting style to be gender-neutral, though, parents can simply adjust their thinking to make room for kids to be who they are. Such tweaks as not shaming boys who cry or encouraging girls who show a competitive streak can go a long way. After all, it's all about focusing on who the child is, and not who society dictates they should be.

More Like This
First Look: The New Jujube x Lilo & Stich Collaboration
The Best Apps For Selling Used Baby Gear
Here's When Your Baby Might Start Sleeping Through The Night For Real
Can You Help Your Baby’s Hair Grow?