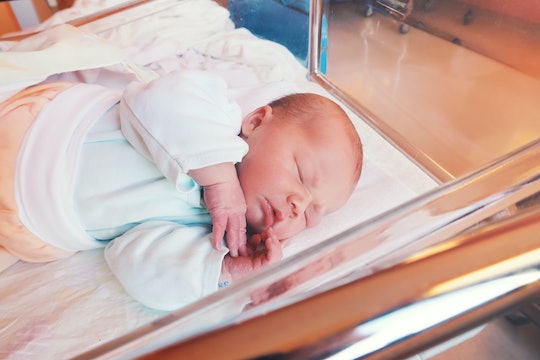 According to a study from McMaster University in Ontario, Canada, premature babies are more likely to grapple with anxiety and depression than babies who are born full-term. Ryan Van Lieshout, one of the co-authors of the study, Impact Of Extremely Low-Birth-Weight Status On Risk and Resilience For Depression and Anxiety In Adulthood, aimed to understand why premature babies struggle more with mental health problems, as there hasn't been much research in this area. Van Lieshout ultimately aspired to figure out if preterm survivors are more susceptible to anxiety and depression due to bullying (prior research has found that premature babies are more likely to be bullied as children), or due to neurodevelopmental problems in the womb.

According to Fatherly, Van Lieshout evaluated "142 extremely low-birth-rate infants (less than 2 pounds and 3 ounces at birth)" in comparison to 13 full-term babies. Van Lieshout followed these two groups for 20 years (science takes persistence, people), and he "monitored outside risk factors of mental illness, including family dysfunction, overprotective parenting, criminality in parents, physical or sexual abuse, and peer victimization or bullying," according to Fatherly.

Ultimately, Van Lieshout discovered that low-birth-rate infants didn't face more stress factors than the 13 full-term babies. Although the low-birth-rate infants didn't encounter a higher level of stress factors than their full-term counterparts, they still reported more instances of anxiety and depression. Given the data, Van Lieshout was left with the conclusion that premature babies might struggle with mental health problems due to the stress they endure in the womb or shortly after birth. For example, if a mother undergoes a lot of stress during an early delivery, this stress can reconfigure the stress responses of a baby's body and brain. Once the baby transitions into childhood, there's a greater chance they'll struggle to handle the stressors of everyday life, which can then lead to problems with anxiety and depression.

Furthermore, Lieshout thinks there might be a correlation between life-saving medical interventions and a baby's brain development.

Van Lieshout's findings make sense, especially when you consider that there's already a link between maternal stress and a higher risk of future neurological problems in children. According to the US National Library of Medicine National Institutes of Health, a "pregnant women’s exposure to a range of traumatic, as well as chronic and common life stressors" can lead to "significant alterations in children’s neurodevelopment."

To take the study one step further, Van Lieshout intends to figure out how parents can reduce mental health risks for preterm survivors. Van Lieshout explained, according to Science Daily:

If we can find meaningful interventions for extremely low birth weight survivors and their parents, we can improve the lives of preterm survivors and potentially prevent the development of depression and anxiety in adulthood.

Although it's unclear what these "meaningful interventions" will be, one can assume that supporting premature babies and their families is a step in the right direction. Children with great support systems tend to thrive, so it's important that more is done to provide preterm survivors with all of the resources they may need.