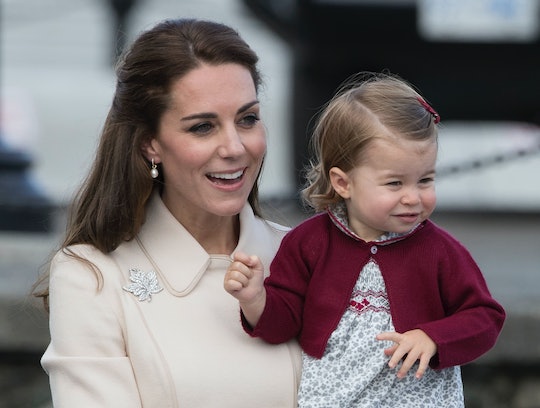 With so many young royals now, the entire royal family seems to be moving into the modern age. But changes are still slowly coming; the system of rules and customs governing royal titles, succession, and behavior has stood for hundreds of years, so it's understandable that the monarchy is a big ship that turns slowly. For example, there’s still at least one pretty outdated rule, which dictates that Princess Charlotte’s children won’t have royal titles, but her brothers' future kids would. But why is that the case?

The short answer is that, even now, royal blood is considered passed down through a father’s status, according to Business Insider. So while the future children of nearly 5-year-old Prince George and 2-month-old Prince Louis would receive royal titles like they did at birth, 3-year-old Princess Charlotte’s would not, as Business Insider explained.

Before 2013, even Princess Charlotte wouldn’t have been considered in the line of succession. At the time, rules dating back to the 17th century meant only male children were considered in the line of succession, according to The Guardian. In fact, the only way Queen Elizabeth II gained the throne was because her parents had no sons. However, with the marriage of Prince William in 2011 the United Kingdom set out to update a few rules, as The Guardian explained.

The most important rule that received a dusting off concerned the order of succession, and it didn’t just affect Princess Charlotte (she wasn’t even born yet.) According to The Guardian, at a meeting in Australia then Prime Minister David Cameron spoke to the leaders of the Commonwealth nations, explaining the set of rules to be updated. As The Guardian reported in 2011, those updates included: the order of succession would now be determined by the order of birth; marrying a Catholic would no longer prevent someone from holding the crown; descendants of King George II would no longer need the monarch’s consent to marry.

With the change to the birth order rule, the queen’s daughter — Princess Anne — now moved up behind Prince Harry in the order of succession, according to Newsweek.

Since that time, Prince William and the Duchess of Cambridge, Kate Middleton, have had three children. Since Prince William is second in line to the throne, according to TIME, his children take precedence over his brother and his brother’s future children.

But because of the rule about parental lineage, Princess Charlotte’s children will be considered differently than her brothers’. They’ll not be able to earn titles or rank through her, according to Town & Country. The publication spoke to Lucy Hume, an expert on the royal family who works for Debrett’s — a coaching company on proper etiquette and lineage — in 2017, and she explained that "royal titles are inherited through sons, so if Princess Charlotte has children they would not automatically inherit the titles ‘HRH’ [His/Her Royal Highness], ‘Prince’, or ‘Princess’.”

Further complicating matters is the fact that a monarch can decide to make exceptions at will, as explained by Town & Country. For example, Queen Elizabeth offered to give the titles of Prince and Princess to the children of her daughter, Princess Anne. Along with her husband, the Princess turned down the offer. The queen also bestowed the title of prince on her husband, Prince Philip, according to Town & Country. While he was a prince in Greece and Denmark, he was not one in Britain until the queen decreed it.

So, unless rules change before then, whoever is on the throne when Charlotte starts her own family could decide to offer ceremonial titles to her children. That still would not change their standing in (or rather outside of) the royal line of succession.

The upcoming generation of royals may be just the right people to bring the traditions of lineage in line with contemporary views of women and gender equality. In 2017, for example, Prince Harry made a bold remark in an interview with Newsweek, he said, "We are involved in modernizing the British monarchy. We are not doing this for ourselves but for the greater good of the people."

So whether or not Princess Charlotte would want her future children on the throne remains to be seen. But someday, maybe even soon, they just might have the chance.