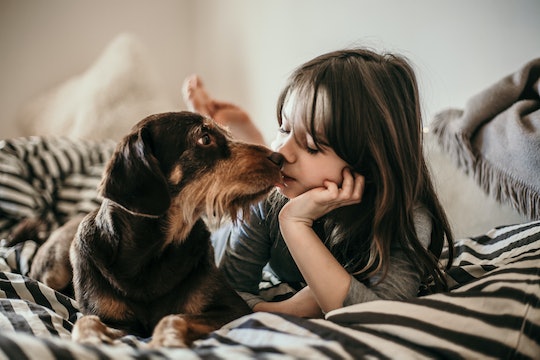 Here's Why Some Animals Are Good With Kids, According To Science

I was recently reading something on the first domesticated animals and thought, "Who looks at a snarling wolf, and thinks, 'We could so be besties if I just bring you a bone and give you scratches'?" Think about it. The concept is truly mind boggling, and yet here we are. Our lives are intertwined with the animals we love. But what determines an animal's or dog breed's suitability for such things? I know that as a parent I wonder about why some animals are good with kids and others need to be avoided.

Even with animals we know interact well with children, from dogs and cats to horses and huge, egg-laying chickens, there are breeds of these animals that aren't well suited to living and interacting with our children. In the scientific community, this relationship is commonly referred to as human-animal interaction or HAI, according to Purdue University's College of Veterinary Medicine. HAI serves as the basis for gobs of research in fields ranging from child development to psychology. However, what makes some animals good with children is highly dependent upon the animal itself, not just the breed or type of animal it is. To a large extent, this includes how the animal was raised and what its personality is like.

I reached out to Newcastle post-doctoral zoology fellow Christopher Morrison, who is looking at the nature of the HAI in non-domesticated and domesticated animals to ask him why some animals are good with kids and others aren't. He tells Romper via email that "it's a matter of temperament, really. Take for instance my current animal of interest, the Choloepus Hoffmanni [otherwise known as the sloth]. It would seem a perfect pet for domestication, and yet, it never quite made it to the table as such. They're generally of a gentle disposition, and they don't do a whole lot in the way of activity. However, because they're so immobile, they don't make good pets, people would be bored of them.

"The animals that are best with children are the ones that have gone through extensive domestication throughout centuries," Morrison explains. "The beasts of burden, if you will. Dogs, horses, chickens, and even sheep and some breeds of pig can make good pets and can do well with your children." He notes that he and his wife live on a smallish farm where they and their children raise a variety of animals which they've interacted with since birth.

He says if you're going to be bringing an animal home as a pet, the way to determine why some animals are good with kids is mostly how that animal has been raised, and for what purpose was it domesticated.

"I won't say that there's any domestic animal or breed that's best for kids," Morrison adds. "I've seen pit bulls more gentle than labradors. However, parents should know that some breeds were cultivated for their companionship, and some for working, and some a bit of both." (My shih tzu was apparently cultivated for sleeping and farting loudly while I write. Who knew that was something to be bred into dogs?)

"You have to look at each animal on a case-by-case basis, and evaluate their behavior and their ability to withstand all the annoying stunts babies and children will pull as they're growing up." Morrison says this is often easiest to do if you raise your children and your animals together. Having raised puppies and small children at the same time, I will tell you, it's trial by fire, but my dog learned from an early age not to be bothered by a tail grab or an ear pull, and she's not food or dog aggressive. The fart thing is real and awful, though. My 10-pound dog can really clear a room.

When I asked him about reptiles and rodents, he says, "Those animals were never properly domesticated, so they'd do best with older children. Ask the local exotic animal vet for the best places in your neighborhood to get one if your heart is set on a bearded dragon or chinchilla."

Talk to your local rescue organizations, and look at Petfinder.com if you're looking to adopt a pet. All the dogs and other animals from these sources are vetted and they can tell you if they're going to be good with your kids, or if you should move on. See how your kids interact with the pets as well. In the end, both pet and kid will need a lot of training, but they'll get so much love in return.