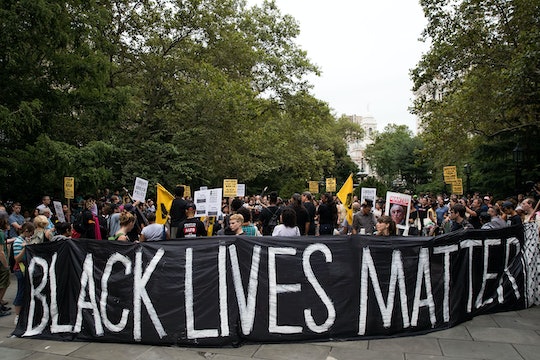 Last week, the DNC took over Philadelphia, television sets, and social media platforms around the country. Viewers tweeted quotes and zingers from prominent elected officials, and celebrity actors alike. For the most part, it was a vibrant convention with many celebratory acknowledgements for Hillary Clinton becoming the first woman major-party presidential nominee. But here's why The Movement For Black Lives demands, released on Monday, actually came at the perfect time. There's still a long road ahead for full equality, and every political party should continue to be challenged – even during the "glass ceiling"-shattering historic moments.

Many supporters of Vermont Sen. Bernie Sanders and Green Party candidate Jill Stein (or those simply anti-establishment) exercised their right to protest at the DNC, but even still, the underlying message last week was clear: Unite to stop Donald Trump. The Republican presidential nominee poses a real threat to already-marginalized communities in America should he be elected President – but he's not the only threat. For black lives particularly, police violence, and economic freedom are some of the lingering systemic issues that have long oppressed black communities. And it's a deep-rooted problem that continues to need attention – especially as candidates in the general election are eagerly vying for the trust of American citizens from now until November.

The Movement For Black Lives is a collective of more than 50 organizations that represent Black people across the United States, including Black Lives Matter. The collective released a comprehensive platform of demands that aim to combat the systemic marginalization of black communities:

Black humanity and dignity requires Black political will and power. Despite constant exploitation and perpetual oppression, Black people have bravely and brilliantly been the driving force pushing the U.S. towards the ideals it articulates but has never achieved. In recent years we have taken to the streets, launched massive campaigns, and impacted elections, but our elected leaders have failed to address the legitimate demands of our Movement. We can no longer wait.

The process to create the demands took one year – beginning last year when 2,000 people gathered in Cleveland to discuss ideas for the movement, the site read. In a breakdown of one the platform demands for political power, the collective called for an end to super PACs, and "unchecked corporate donations" that influence political elections, along with ensuring voting rights, and an increase in funding for HBCUs.

What's especially interesting about the platform, is that some of the demands, like, reparations, are often viewed unfavorably and do not make the conversation in major-party platform settings like the DNC. But some polls suggest that significant percentages of black Americans support reparations – therefore making it an important conversation, at the very least, for all political candidates.

In an interview with The New York Times, Marbre Stahly-Butts, a leader in the Movement for Black Lives Policy Table, explained why the demands "go beyond individual candidates."

"On both sides of aisle, the candidates have really failed to address the demands and the concerns of our people," she said.

And as police violence continues to disproportionately affect Black lives, among other systemic issues, it continues to be important to push for justice, during and after the general election.