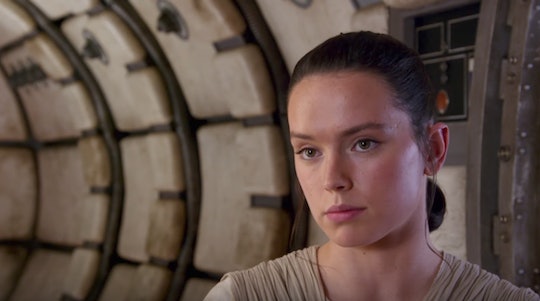 Early last year, toy company Hasbro came under heavy fire from fans for excluding a key character from Star Wars: The Force Awakens from its movie-themed Monopoly set. Rey, the badass heroine who takes the reigns of the plot in Episode VII, was nowhere to be found among the game's token character set, igniting backlash from the public online and a promise from Hasbro to correct their error. However, over a year and a half later, the Star Wars Monopoly game still has no female characters — and Hasbro's reason for excluding Rey from the game simply doesn't match up to reality.

Hasbro first promised to include Rey in future editions of the game in January 2016, after the hashtag #WheresRey took over Twitter, with the company saying it had initially avoided her inclusion in order to avoid spoiling the movie's plot before its release. At the time, the game only featured tokens of Finn, Kylo Ren, Luke Skywalker, and Darth Vader, a character who barely even makes an appearance in The Force Awakens, save for a few minor implied cameos.

"The Star Wars: Monopoly game was released in September, months before the movie’s release, and Rey was not included to avoid revealing a key plot line that she takes on Kylo Ren and joins the Rebel Alliance," Hasbro said in a statement last year, according to Variety. "We love our fans’ passion for Rey, and are happy to share that we will be including her in the Monopoly: Star Wars game, available later this year."

However, that was back in early January 2016, and over a year later, no updated version of the game has become available. Romper reached out to Hasbro for comment, but did not hear back immediately. However, speaking to the Associated Press about the decision, Hasbro spokeswoman Julie Duffy said Rey was not included in the updated game "due to insufficient interest."

Hasbro did make the Rey game token back in 2016, but decided to simply offer it to customers who requested it via customer service rather than including it by default.

One 8-year-old, Annie Rose, probably put it best when she wrote an outraged letter to Hasbro last year, writing:

Without her, there is no Force Awakens! It awakens in her! And without her, the bad guys would have won! Besides, boys and girls need to see women can be as strong as men! Girls matter! Boy or girl, who cares?

Little girls have already had their favorite characters excluded from games for long enough, and just as the whip-smart Annie Rose pointed out, kids need to grow up aware that women are just as capable as men. By leaving characters like Rey and the Black Widow out of action figure line-ups and games, companies condition girls to only see their female selves reflected back at them in the world of princesses and mermaids, rather than fighters and superheroes. Buying a female Jedi should not be any harder than finding a Princess Ariel product, but it is.

By leaving Rey — you know, just the lead character of the movie — out of the Star Wars: The Force Awakens Monopoly game, Hasbro is telling both young boys and girls that women are still simply side pieces, even when they're actually the star of the show. And it's about time we stopped treating them that way.