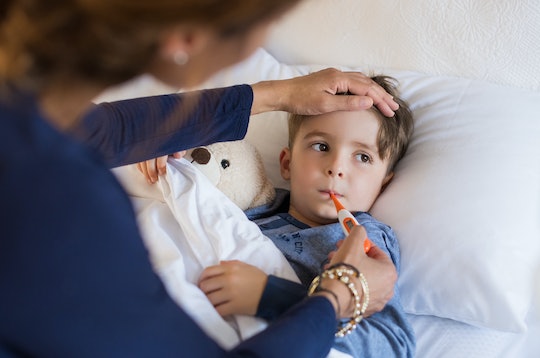 Here's Why There Are Deadly Flu Outbreaks Across The Country

This year's flu season is worse than most. It's widespread in 46 states, hospitalizations and emergency room visits are higher than average, and at least 106 people have died so far. The reason why there are deadly flu outbreaks all boils down to the strain that happens to be prevalent this season: Influenza A virus subtype H3N2. As with most recent years, there are actually two strains making the rounds — the other is H1N1, better known as the "swine flu" — but H3N2 is the real troublemaker, according to ABC News. Flu seasons during which H3N2 is the predominant influenza strain usually see higher death rates; it was responsible for about 20,000 deaths total during the 2012-2013 and 2014-2015 seasons.

This winter, flu risk has been elevated due to unusually cold temperatures, forcing more people to stay inside and share their germs. But the other problem with H3N2 is that it's harder to prevent with vaccines. All flu viruses mutate, but H3N2 tends to mutate more than others. Flu vaccines are produced in eggs, and the virus also undergoes changes during that process, but once again, H3N2 is more susceptible to change. This means that the vaccine could be looking for a slightly different version of the virus than what actually ends up spreading.

Back to the issue of effectiveness: according to the New England Journal of Medicine, Australia's flu season was rough. There were more than 218,000 cases reported by mid-October, versus just 59,000 during the 2009 H1N1 influenza pandemic. The country's flu season occurs six months before the United States', so it's often used as a predictor of what we'll be up against. H3N2 was the predominant strain, and preliminary estimates found that the vaccine used there, which is the same as the one the U.S. is using, was only 10 percent effective.

Dr. Ed Belongia, a vaccine researcher and director of the Center for Clinical Epidemiology and Population Health at Wisconsin’s Marshfield Clinic, told Stat News that he blames the tricky way that the current strain mutates: "We don't have a flu vaccine problem so much as we have an H3N2 vaccine problem," he said. On average, the H3N2 component of the flu vaccine is about 33 percent effective, while the component that protects against H1N1 is nearly twice as effective.

But the Centers for Disease Control caution Americans not to put too much stock in what happened in Australia; last year's flu vaccine was 39 percent effective against all strains, and 32 percent effective against H3N2. This year's vaccine includes the same H3N2 component as last year's, and most of the H3N2 viruses tested in the U.S. this season are still similar to that strain. The CDC believes that's a better predictor of vaccine effectiveness, and once again, any protection is better than none. In addition to getting vaccinated, people should take care to wash their hands and stay away from sick people to prevent illness, but if you do contract flu-like symptoms, see your doctor, because antiviral drugs can shorten the length and severity of your illness.

More Like This
What Parents Need To Know After DEA Issues Warning About "Rainbow Fentanyl"
New Report Shows 80% Of Pregnancy-Related Deaths Are Preventable
The Difference Between The PICU & The NICU
What Is RSV?