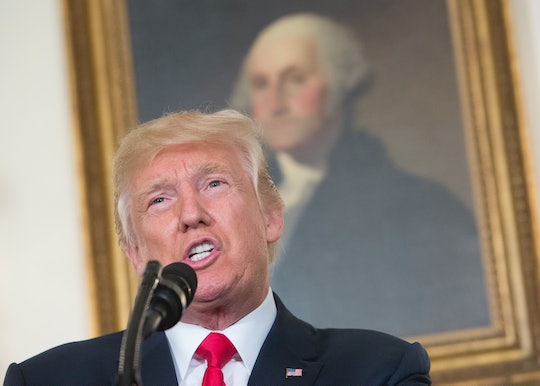 On Monday, President Trump gathered with reporters in the Diplomatic Reception Room at the White House to further denounce the white supremacist violence that occurred in Charlottesville, North Carolina, specifically calling out the KKK and neo-Nazis in his brief statement. It took three days for the president to actually condemn the white nationalist perpetrators of Saturday's violence — but here's why Trump's second Charlottesville statement basically means nothing anyway.

Until Trump decides to actually tackle the problem of white nationalist violence in America rather than simply condemning its existence, his words are just that — words. Thoughts, prayers, and promises aren't enough: The president needs to act now. He could start by cleaning house and removing Steve Bannon, his White House chief strategist with ties to Breitbart, the news website that has given white supremacists and neo-Nazis a platform to spew their hatred.

I recognize that this is a very, very fine line to walk: The First Amendment protects freedom of speech, so Bannon is free to think and feel what he pleases. But when Trump appoints people like Bannon to positions of power, he's helping to institutionalize white nationalist values by effectively telling the American people that these values are tolerable within his White House administration.

"Racism is evil, and those who cause violence in its name are criminals and thugs, including the KKK, neo-Nazis, white supremacists and other hate groups that are repugnant to everything we hold dear as Americans," Trump said in his second statement on Charlottesville. According to Mother Jones, Bannon is reportedly a member of an "alt-right" neo-Nazi Facebook group that posts racist content and even death threats against Obama on a regular basis. Bannon did not immediately return Romper's request for comment. And yet despite Trump's condemnations of such racist, violent rhetoric, one of the white supremacy movement's shining stars remains his right hand man in the White House.

Let's not forget that when Trump appointed Bannon a White House adviser, David Duke, former KKK leader, called Trump's decision "excellent" when speaking to CNN in November. Duke said, "You have an individual, Mr. Bannon, who's basically creating the ideological aspects of where we're going. And ideology ultimately is the most important aspect of any government." The dangerous ideology Bannon allegedly has, in addition to serving as the executive chair of "the platform of the 'alt-right,'" also includes "destroying the state" a la Lenin, as Bannon himself told The Daily Beast in 2015.

As long as someone with extensive ties to the white nationalist branches of the white supremacy "alt-right" movement holds a position of power within the White House, Trump can condemn white nationalist violence until he's blue in the face — but it will mean nothing until he can root out the same ideology from his administration.