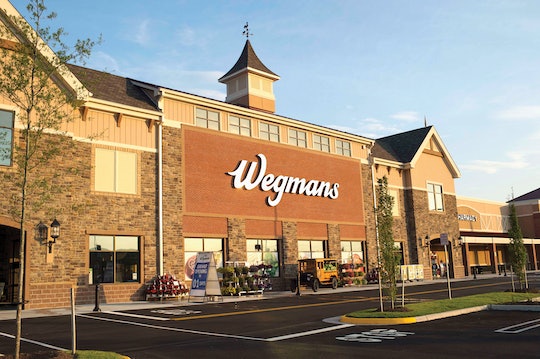 Here’s Why Wegmans Is America’s Favorite Grocery Chain, According To A New Survey

As lame as it might sound, grocery shopping — alone — has become one of my favorite past times since I became a mother five years ago. These days, I enjoy nothing more than grabbing a cart and perusing the aisles in quiet contemplation, although I will admit that this is much more enjoyable in some stores than in others. I'm clearly not the only one to have a preference though: for the third year in a row, Wegmans has taken the top spot on the Market Force 2018 US Grocery Benchmark Study, according to People, and here's why Wegmans is America's favorite grocery chain.

Depending on where you live, you may not even have a Wegmans nearby — the New-York based chain has more than 90 stores, but only in six states. So what makes it so popular? Shoppers love Wegmans for the chain's "fresh produce, reasonable prices and massive stores," according to TODAY, and they ultimately gave Wegmans the highest overall score, at 77 percent. But competition is certainly fierce: Publix, a Florida-based chain with stores throughout the Southeast, came in at 76 percent, while Trader Joe's — which had formerly been number one before being dethroned by Wegmans in 2016 — had a similarly-impressive score of 75 percent.

In addition to the usual elements, like affordability and quality, there are other aspects that seem to make Wegmans particularly popular. For one, their produce game sounds strong: the chain offers "up to 700 different fruits and vegetables on any given day," including "locally grown fruits and vegetables picked daily and delivered directly to the store." And it also seems particularly beloved for its prepared foods section — including its signature "Old Fashioned Submarines" counter. In fact, Wegmans subs are such a favorite that in November 2017, New York Upstate ordered and ranked all the submarine sandwiches on offer at Wegmans in tribute (roast beef took the number one spot); on Trip Advisor, one customer of an Amherst, New York, Wegmans wrote, "If it weren't for Wegmans subs, I'd starve."

But it turns out the Market Force study isn't the grocery chain's only accolade. In April, Wegmans was ranked number one for customer experience in the 2018 Temkin Experience Ratings survey — a fact they celebrated with cake for employees and customers at each of their 95 stores. And speaking of employees, Wegmans also came in at number two on Fortune's "100 Best Companies to Work For" list for 2018.

In addition to being the overall favorite, Wegmans tied Publix for cleanliness and item availability, according to Huffington Post, while Trader Joe’s beat both stores for having the fastest checkouts and friendliest cashiers. Wegmans isn't entirely free from criticism though: the chain faced backlash in Feb. 2017 for stocking products from the Charlottesville-based Trump Winery in its Virginia stores, according to The Washington Post (yet, judging by the Wegmans website, it still appears to be available).

Other winners in the Market Force survey? ALDI, which took top marks in the value category, followed by Costco and WinCo Foods. But others didn't fare so well: Safeway and Walmart earned the lowest marks, with only 42 percent and 34 percent respectively.

Even though I've never shopped at Wegmans, I do now kind of feel like I'm missing out on some seriously delicious sandwiches. And even if they didn't come out on top, it also sounds like Wegmans' competitors are also bringing their grocery A game, which, in the end, is a really great thing for consumers. Especially those of us who might particularly appreciate having a quiet hour to themselves just to stroll through the produce section without any tiny children asking them for a snack, or to help them put their shoes on the right feet.