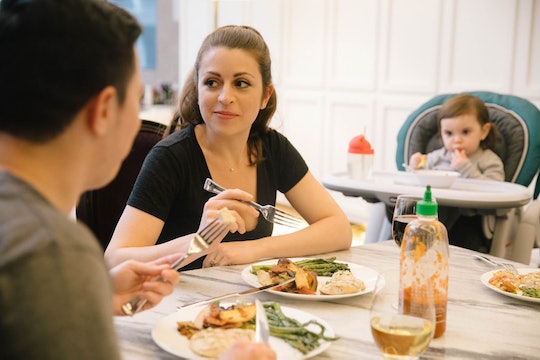 Here's Why You Can't You Eat Cheese When You're Pregnant, In Case You Needed To Cry Today

It's always important to eat nutrient-dense foods and well-balanced meals to maintain good health. And while pregnancy has a reputation of being a "prime time" for giving into all the cravings, there are some foods expectant mothers are told to avoid for safety reasons. Tut the so-called "no-no list" is much longer than the few, stereotypical items we've heard about on television via romantic comedies. So if you're staring at your favorite brie and wondering why can't you eat cheese when you're pregnant, know that you're not alone. You should also, probably, prepare yourself before you hear the answer. Guys, this one is going to sting a bit.

Now, before your heart is broken beyond repair, know that you can indulge in a few cheeses. Parents clears things up by letting their readers know that only certain cheeses should be avoided when you're pregnant, including "feta, goat cheese, Brie, Camembert, blue cheese, and Mexican queso fresco, or queso blanco, "which could be made with unpasteurized milk, meaning they could potentially carry listeria (a bacteria) that could be dangerous. The Center for Disease Control and Prevention (CDC) say pregnant women are 20 times more likely to become infected than non-pregnant, healthy adults." In other words, rolling the dice in the cheese department could have dire consequences. According to the American Pregnancy Association, a listeria infection during pregnancy could cause "miscarriage, premature delivery, infection to the newborn, and death to the newborn (about 22 percent of perinatal listeriosis result in stillbirth or neonatal death)."

Today's Parent breaks it down with a "safe" and "unsafe" list, showing how complicated dairy products, such as cheese, can be. Even cheeses of the semi-soft variety that are made with pasteurized milk (such as brie) can put you at risk for listeriosis. Apparently, this bacteria can thrive even in refrigerator and freezer temperatures due to high-moisture/low salt and acids. The site goes on to add that cheese, like most foods, can be contaminated after pasteurization so that's not necessarily a hard-and-fast rule. The APA says the only dairy a pregnant woman should consume, be it milk, yogurt, or cheese, should be in pasteurized form.

The Mayo Clinic describes Listeria infection as a "food-borne bacterial illness that can be very serious for pregnant women and people with impaired immune systems," adding that while it may not be entirely harmful to a healthy adult (aside from flu-like symptoms), it can be fatal to newborns and unborn babies. Staving off that cheese craving might not be easy, but considering the risks, it's something to think about before consumption.

If you really want cheese, stick to the hard types. They don't have nearly as much water packed in, meaning they're less likely to be contaminated with bacteria. However, it's best to treat any pregnancy with caution to avoid any unwanted, or dangerous, illness. If you're unsure, of course and always, ask your doctor before you order a cheese plate.