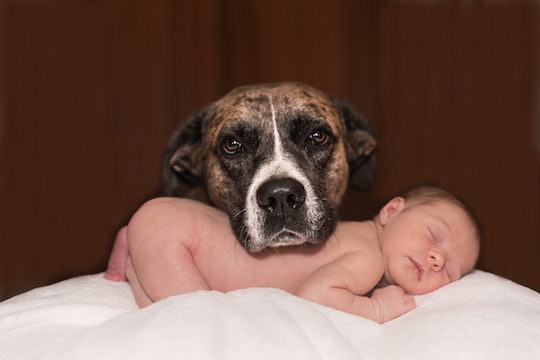 Here's Why You Shouldn't Let Your Dog Lick Your Baby's Mouth, According To Experts

Dog lovers of the world are happy to get close to their best friends. But when you bring home a new baby, it's important to remember that things need to change for your dog, too. Sure, once upon a time mouth kissing your puppy was no biggie, but when it comes to your kiddo, you might want to think twice. Here's why you shouldn't let your dog lick your baby's mouth, according to a veterinarian and a few doctors.

First and foremost, it's gross. You know exactly where that mouth has been. Dogs use their tongues to clean up after going to the bathroom. There are all kinds of germs and creepy crawlers in those mouths, even some that are resistant to antibiotics, according to Woman's Day.

According to Dr. Leni K. Kaplan from Cornell University's College of Veterinary Medicine, when a dog licks you on the skin, it's usually no biggie, but your face is a whole different story. He told the New York Times that when you get a dog's saliva in your mucus membranes, like your mouth and nose, that's when you can really catch something bad from your pet. "Studies have confirmed this exposure, and it can lead to mouth and gum infections, or even systemic infections," Dr. Marc Leavey, a primary care doctor, told Woman's Day.

This is especially dangerous for newborns who don't yet have fully developed immune systems, according to a report from the Miami Herald. One elderly woman in the U.K. almost died from sepsis, a blood infection, after being licked by her lovable Italian Greyhound, the Herald reported.

And if you're feeding your dog raw meats, the danger of them getting salmonella and passing it onto your baby through an innocent lick is also a real danger, according to Woman's Day.

But besides the obvious hygiene issues, there could be something more behind your pooches smooches: dominant behavior. According to Woman's Day, experts say dogs often see children as submissive to the dog's role in the family and that often dogs using their mouths to touch their humans can be a sign of trying to control them.

"While many of us see our pets as surrogate family members, we do not want our pets to feel on equal status with our children," Dr. Ashanti W. Woods, a pediatrician, told Woman's Day. "Because both dogs and children are unpredictable in their behaviors, it is not a good idea to establish a relationship with the family dog licking the child's face."

It can be hard to get your new baby and dogs to get used to the new order of things. Well-known dog behavior expert Cesar Millan offers several great tips about how to get your baby and the family dog off to the best start, including establishing firm boundaries for the dog's interaction with the baby, and letting the dog know the baby and the nursery belong to you, the "pack leader," and that you are in charge of when they will interact.

Most importantly, Milan said, you have to feel confident about your ability to control the dog around the new baby. And that making sure he or she doesn't lick the newest family member on the face, despite how damn adorable it is to watch.

More Like This
Yes, It’s Possible To Get Pregnant If You Have An IUD
Celebrate Baby's First Christmas With These 40 Instagram Captions
Here’s What To Do If Your Baby’s Nose Bleeds After Suctioning
Here’s Why Your Vagina Itches At Night, According To Experts