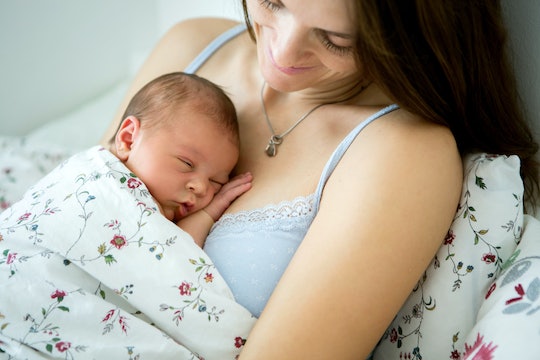 The point of enduring what feels like a lifetime of pregnancy discomfort is, of course, meeting your "mini" for the first time. But what happens when you see your baby for the first time and think, "Are you sure that one's mine?" Sure, babies are a little worse for the wear after they've made their way into the world, but once any bruises, bumps, and odd-shaped heads go away, it's not uncommon to wonder if someone was swapped at birth. Turns out, the reason why your baby looks nothing like you is pretty damn complicated. You know, kind of like parenthood itself.

When first examining your newborn, you will probably take in the color of their eyes. If you're a brown-eyed Caucasian mama, for example, you might be surprised to find you've given birth to a blue-eyed baby. Your blue-eyed baby may not stay that way for long, however, as babies born with blue eyes may undergo an eye color change within the first 6 months up to the first year of life. The website Healthy Children explains how you can start looking for signs of an eye-color change:

"If your baby’s eyes are going to turn brown, they’ll probably become “muddy”-looking during the first six months; if they’re still blue at that time, they’ll probably remain so. In contrast, infants with dark-skinned heritage generally have brown eyes at birth, and they tend to remain that color throughout life."

Healthy Children's website goes on to provide a simple guideline for parents to follow. It is likely, they say, that in the scenario in which you have two blue-eyed parents, you will also have a blue-eyed child, but it won't happen every single time. And if you have two brown-eyed parents, it is likely that they will have a child with brown eyes (though again, not every single time). If one parent has blue eyes and the other brown, the odds on the child's eye color are 50/50. Healthy Children's website suggests waiting until the first birthday to "call" your baby's eye color, because there could still be some changes after the first six months.

The explanation above is not a fool-proof one, for sure, but more of an exercise in probability. There are actually a number of more complex things happening that determine eye color inheritance. That's because multiple genes are involved in determining eye color. On the National Institute of Health's (NIH) website, eye color is explained as something determined by variations in a person's genes. The website discusses how most of these genes are associated with the amount of melanin (the substance that gives skin, hair, and eyes their color) a person has in the front layers of the iris. People with brown eyes, the NIH's site explains, have large amounts of melanin in the iris, while people with blue eyes have much less.

A number of factors (including a particular protein acting on something called the OCA2 gene, and another gene called the HERC2 gene) plus several other genes, all play parts in determining eye color. It is not as simple as what color your eyes and your partner's eyes are that determines the color of your baby's eyes.

As for hair and skin color, melanin plays a big role here, too. In an article published in the National Center for Biotechnology Information (NCBI), it states that hair and skin color differences are mostly genetically determined, but again, they are due to genetic variations. Whether your baby is dark-skinned with dark hair, for example, is because of variations in the amount, type, and "packaging" of melanin polymers. A gene called the MC1R gene is involved in the process of making something called a melanocortin 1 receptor — a receptor that produces that aforementioned melanin. There are two forms of melanin — eumelanin and pheomelanin. People who produce mostly pheomelanin tend to have be fair-skinned, blonde, freckled, or have red hair. So in addition to the genes your baby inherits from you that play a role in determining hair color, the color that ultimately gets expressed depends on whether their cells make more eumelanin or pheomelanin.

Genetics have their way, once again, when it comes to your baby's hair texture, too. According to the NIH, genetic factors play a major role in determining whether your baby's hair is going to be straight, wavy, or curly, as well as whether it will be fine or thick. There are, as the website explains, different studies that suggest how different genes influence hair texture and thickness, depending on ethnic background.

There's even evidence that just a subtle change in DNA can potentially change the course of your child's whole hair future. A study published on the website for Stanford Medicine found that a single molecular change is able to determine blonde or brunette hair (in rats, at least).

With so much left up to nature, you may as well not even bother with those apps that take your face and your partner's face to see what your resulting offspring may look like. It is best to probably lean into the idea that from the moment of conception, so much is out of your control – including your baby's features.