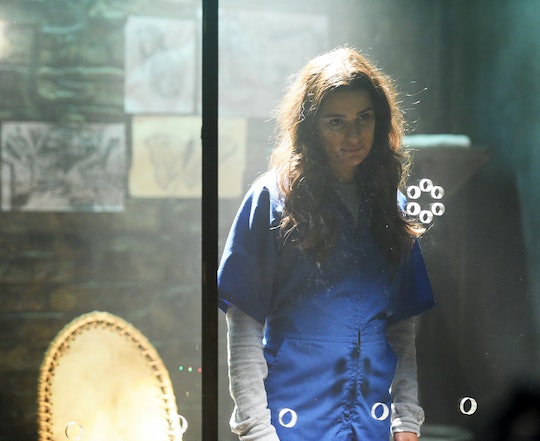 On Tuesday night's episode of Scream Queens, we know that there's at least two killers out on the loose. There's the Green Meanie who went after Denise (from Quantico), and also Hester, who Denise let out for the Halloween party in return for telling her who the killer is. Though she was given a Jason costume, Hester's Ivanka Trump costume on Scream Queens was way more culturally relevant and way creepier. Scream Queens is undeniably brilliant in its ability to blend relevancy, including the multiple references to Hamilton, and classic horror, like the 80s theme.

After Hester's Ivanka Trump attacked poor, blue Chanel Oberlin, the gang immediately suspected Chanel Number Five (of course) mainly because Number Five had been planning on dressing up as Ivanka for Halloween — not to be confused with Chanel-o-ween, obviously. They only realized the truth when "Ivanka Trump" showed up at the party anyway, and so did Number Five, dressed as Ivana Trump, not realizing they were two different people. Then, naturally, all hell broke loose as new patients began showing up at the hospital with psychotic episodes and vomiting, courtesy of the Green Meanie spiking their bobbing for apples water. (As if this traditional Halloween game wasn't unsanitary enough.) And this gave Hester the perfect opportunity to blend in among all the mayhem.

Clearly Hester is using her Ivanka Trump costume for evil purposes. Unfortunately, nobody knows that she's the one behind the mask, which makes her more dangerous than ever. We know that Hester is not actually the Green Meanie, but judging by the Meanie's attack on Number Five, they could be working together. By the way, will Number Five ever catch a damn break?

If Hester is still out to kill the Chanels, which seems to be her intent under the guise of Ivanka, then that means that she and the Green Meanie must have slightly different goals. But the most important question of the evening is... does this mean that Hester is a Donald Trump supporter?