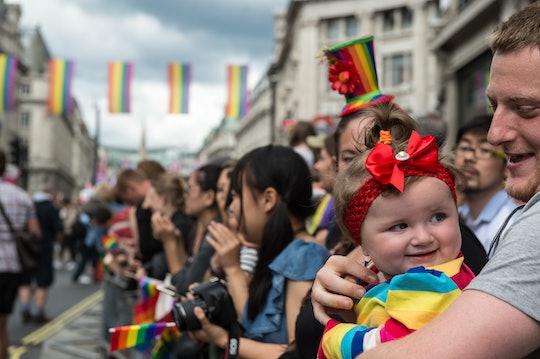 Marrying, divorcing, parenting, buying and selling products: none are exclusively straight, cisgender topics and activities. But seeing Pride shoes and generic "Love is Love" t-shirts and rainbow onesies you would think that LGBTQIA+ parents and allies only shop once a year. While these "special edition" products from so-called LGBTQIA+-friendly businesses allow supporters of human rights to display their allyship, they simply aren't enough.

When it comes to LGBTQIA+ inclusivity, there is a line between allyship and performative allyship. That line isn’t thin, to be sure, but it can still be hard to see. This is particularly true when it comes to businesses that want to cash in on the power of the rainbow each June during Pride Month, then retreat back to their heteronormative campaign strategies and initiatives.

If queer people are living similar lives as their straight counterparts, why are we not part of every company’s high-level board room conversations? Why are we avoided? Seen as controversial?

Honestly, the most controversial thing I do on any given day is give my kid the wrong cereal bowl.

Which is why it's nothing short of painful to witness employers who say they value LGBTQIA+ employees fail to walk their Pride-month talk, or neglect to have detailed and complete non-discrimination policies.

Well, I see you, businesses.

I see the awkward flag-waving by companies who just want my money. I can tell your fingers are crossed behind your rainbow-colored brand logos. I see the way you creep out of the woodwork once a year to “support” the LGBTQIA+ community, then retreat back into the woods, shamelessly.

You are taking advantage of my very marginalized community, and in the wrong way. Because there are absolute advantages to including LGBTQIA+ folks in your business plans, especially financial advantages — the very financial advantages I’m assuming you hope to gain with your faux support. But if you are not advocating for my rights, you don’t have any right to advocate for my money.

We have money to spend and we are seeking representation that helps us feel seen. We want our money to help our community, not hurt it.

Being an LGBTQIA+ person, parent, and consumer living in a heteronormative world is frustrating, lonely, and defeating. It feels like we are constantly waiting to be invited into a new space, a new campaign, a new product line, or a new set of bylaws. We are constantly wondering if the products we buy are helping (or hurting) our community, or just aiding the employers stocking their physical and virtual shelves with said material items.

But we make do and make choices that don’t completely compromise our values and dignity. And while it’s scary and exhausting and requires an enormous amount of emotional labor, members of the LGBTQIA+ community are asking to be included in marketing plans. We have money to spend and we are seeking representation that helps us feel seen. We want our money to help our community, not hurt it.

While a 2018 Gallup poll reported that there are nearly 16 million LGBT-identified Americans, the same poll failed to capture the Q+ of our community. Queer, questioning, intersex, asexual, and the nonbinary, gender fluid folks who live under the rainbow flag wrapped in our own flags of pride add a significant number to the non-heteronormative market. According to Hornet and Kantar Consulting, a digital home for the LGBTQ+ community and a social-networking site, LGBTQ+ people make up 13 percent of the U.S. population. “The community’s buying power in 2016 totaled $1 trillion — which is on par with African-American and Hispanic consumers in America," the site states.

To back this up, a 2016 report released by The National LGBT Chamber of Commerce found that the LGBT community spends more than $917 billion every year. The same report found that people within the LGBT community are 75 percent more likely to change brands when they know that brand is LGBT inclusive.

Sixty-three percent of these queer millennials plan to add to or start a family.

I shouldn’t have to, but I do and will spend more time and more money on sites, products, companies, and with people who support me. The LGBTQIA+ community will actively avoid products and businesses who don’t. And it’s not just LGBTQIA+ folks who are loyal and vocal. We call on our allies to be the same way.

And our army of allies is growing.

According to a 2019 report from the Pew Research Center, 75 percent of millennials support same-sex marriage. And of the 18-35 year old millennials in this country, 6.1 million identify as LGBTQ. Sixty-three percent of these queer millennials plan to add to or start a family, according to the LGBTQ Family Building Survey done by The Family Equality Council.

The LGBTQIA+ community will raise kids who put their money into the pockets of inclusive companies who advertise diversity. The next generation will make it a point to invest in those who take care of their mothers, fathers, sisters, and brothers. And companies will suffer if they ignore them.

The Human Rights Campaign uses its Corporate Equality Index to measure corporate policy and procedures regarding LGBTQ employees. Per the 2019 report, 1,028 of the country’s biggest businesses demonstrated a commitment to inclusion and equality, and 517 of them earned a top score of 100. Companies like American Airlines, Burger King, Gap Inc., Nike Inc., Under Armour, and The Walt Disney Co. were among the "Best Places to Work" for LGBTQ equality.

Most if not all of these companies support LGBTQ folks year-round, so when I see them wave the Pride flag in June, I feel seen, and not the sharp sting of hypocrisy. It feels good knowing that Disney will donate 10 percent of the proceeds to GLSEN when people buy from their Rainbow Disney Collection. And I appreciate that Under Armour donates money to Athlete Ally, a nonprofit that promotes LGBTQ inclusion in sports.

Being inclusive should not be considered a favor, or even burden. That much should be made clear. It is simply the right thing to do. But inclusivity is increasing the bottom line of employers who are making it a priority, not hurting it. These companies are doing just fine, if not for humanity’s sake, then for business’ sake.

Change and inclusion needs to happen for humanity’s sake, but you are making poor business decisions if you don’t realize our purchasing power and then add us to the business plan.

These companies are the standard. They demonstrate allyship year-round and use Pride to raise money for the LGTBQIA+ community, rather than benefiting from the community by simply saying they are an ally. It’s not that companies can do more; they should do more.

But many people have not received the memo, or have and are actively choosing not to read it. The U.S. economy could add an extra $9 billion a year if companies improved their ability to retain LGBT talent via inclusive policies, according to Out Now. Without discrimination policies that support and protect LGBTQIA+ folks in the workplace, there is low productivity by the people terrified to show up at their job. Jobs are not being adequately completed, or completed altogether, when a queer employer quits or is fired and jobs aren’t backfilled.

And, of course, lawsuits aren’t cheap either.

Now is time for the majority — the mass market leaving a lot of money on the table — to change.

Luring us in once a year by taking advantage of Pride isn't going to cut it. Marginalized groups need to be heard and accepted all year long. We don’t need companies using the rainbow for publicity and gross opportunistic money grabs each June, then crawling back to their mundane heteronormative marketing strategies.

Now is time for the majority — the mass market leaving a lot of money on the table — to change. The LGBTQIA+ community is not only worth every seat at the table and place in a checkout line, but we will add more benefit than risk. Change and inclusion needs to happen for humanity’s sake, but you are making poor business decisions if you don’t realize our purchasing power and then add us to the business plan.

LGBTQIA+ people need to become a consistent audience for companies and advertisers. We need to be consistently thought of, sold to, and included. Not just in June.