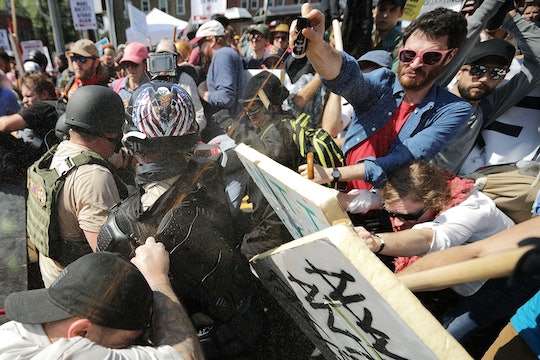 So many of us are tired.

After this past weekend's horrendous events in Charlottesville, tired is an understatement. We stand weary, and the weight of what we're dealing with often makes it hard to stand at all.

As a parent, sometimes the thought of raising two gorgeous little brown boys in this sort of atmosphere feels utterly daunting.

There’s this added, unspoken burden that goes along with raising kids of a marginalized social or racial group. With it comes many, many conversations and exercises in compassion, acceptance of differences, and realistic perspectives on various social injustices and, unfortunately, accurate portrayals of hate and intolerance.

How do I inform my kids that large populations of our fellow countrymen are unable to extend compassion to those unlike their own? How can I explain to them that so many people will always protect themselves before protecting others? How do I tell my sweet boys that so many people believe, in their hearts, that there is not enough room in this nation for every kind of person, including maybe them?

Neutrality is a privilege that not all of us have, and it’s no longer an acceptable stance. (Was it ever, really?)

It seems as though simple human decency is at stake. The narrative we write for our children, about how our society runs, what our country believes in, and, above all, the kind of people they have the ability to become in the years to follow hangs in balance.

What we’re learning day after day about hate is that it’s real. And that it’s learned.

We know our babies aren’t born knowing how to hate, but what we need to accept is that if we’re not resisting hate, we’re teaching it.

I can’t do my part unless you do yours.

Neutrality is a privilege that not all of us have, and it’s no longer an acceptable stance. (Was it ever, really?)

To be honest, I’m as much at fault for falling into the realm of neutrality as you are.

You see, I grew up in a small, quiet town, predominantly white, where people were racist, but it was considered impolite to be outwardly so. Even in that sort of hushed, silently bigoted atmosphere, as a brown girl and daughter of Indian-born immigrants, I was far from immune to the shrouded jabs and underhanded digs that come with being different in this country. I stood outside more than one classroom door, unnoticed, and cried while listening to a teacher talk about me with racially charged undertones, and, on a few occasions, I had incredible classmates defend me to those who truly believed that I was inferior.

As I grew up, with every slight, I became more quiet, more self-conscious of who I was, and more ashamed of my skin and its lack of whiteness.

Neutrality was the general culture, and so, I became silent and remained that way for a long time.

But now, it's not just about me, and it’s not just about you. When we bring babies into the world, we do so with the intention of raising people who will be brilliant, impactful, incredible beings, who will do and be more than we ever could ever imagine for ourselves.

My white friends, neighbors, fellow parents — I’m tagging you in. We need help.

As James Baldwin said, "It's has always been much easier (because it has always seemed much safer) to give a name to the evil without, than to locate the terror within."

Raising our kids to be different from who we are requires us to increase our own self-awareness and voluntarily remove ourselves from the safe, warm bubble encompassing our private lives. If we don’t, if we allow our kids to be neutral under our guidance, if we continue to be indifferent or hide behind the veil of “well, it doesn’t really affect me,” we choose the side of the tormenters. If we don’t stand up for goodness in plain sight of our watchful children, we’ll perpetuate the sick glow of the hate-fueled torches that burned bright in Charlottesville on Saturday, and it will reflect directly on the faces of our kids.

My white friends, neighbors, fellow parents — I’m tagging you in. We need help.

(And yes, my non-black friends of color, I’m talking to you, too, because choosing to remain within your own cultural bubble with the same like-minded folks that you’ve always known, with no intent of venturing outside of it, is just as destructive.)

Do better — for your babies, and for mine.

Step outside of your comfortable lives and take a deeper, closer look at the way those around you have to live, and the things they have to experience. Fight for something other than yourself.

Don't mislead them, saying skin color doesn't matter, that we're all the same, that we shouldn't see color.

Talk to your kids about hate, how it’s infectious, and how it spreads. Remind them that it stems from fear and it breeds fear. Bring up a racial stereotype that you once believed, analyze its basis, and dispel it.

Don't mislead them, saying skin color doesn't matter, that we're all the same, that we shouldn't see color. We know that's not true. We should see color; it's what makes us beautiful. We are all very different, and that's more than OK. We have to teach our kids not to hide those differences, not to avoid them in others, but to take the time to see them, to learn them, and to accept them.

So, don’t shy away from real conversations about race and skin color and prejudice. Just look for similarities much more often than you point out differences. The diversity of people and communities in America is unparalleled, and that, if you ask me, is one of the great wonders of the world.

While we do this, let’s not forget that the vicious, racially motivated groups that threaten violence and harm towards others are not the majority nor the norm of this country. They are the exception, and though it's vital we are aware of their existence, it's as vital that we don't see hate in everyone we meet.

I refuse to lose faith in the humanity of this country. As Anne Frank said, "In spite of everything, I still believe that people are really good at heart."

But, everything in me in also tired and overwhelmed at the thought of what to do next. We, parents of color, can't do this alone anymore.

We need your help.