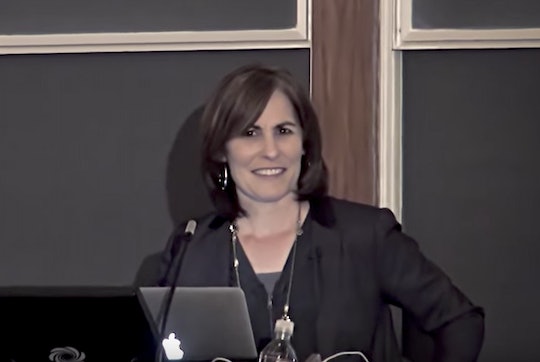 Research has shown that abstinence-only sex education does not work. States the promote abstinence-only messages in school have higher rates of teenage pregnancy and births, studies have found. Students who learn abstinence in school are also at a higher risk of contracting a sexually-transmitted disease. That's why U.S. Department of Health and Human Services appointee Valerie Huber, an abstinent-only proponent, would endanger youth with outdated ideas.

On Tuesday, President Donald Trump announced that he tapped Huber as chief of staff in HHS' Office of Adolescent Health, which oversees the Teen Pregnancy Prevention Program, according to Glamour. Huber has served as the president of Ascend, formerly known as the National Abstinence Education Association, since 2007 and once managed Ohio's abstinence-only education program for three years, Glamour reported.

Huber's appointment shouldn't be much of a surprise as it falls in line with Trump's efforts to beef up abstinence-only education in the country. After all, the president's budget proposal includes a $227 million investment in expanding "the abstinence education and personal responsibility education program" between 2018 and 2024, according to Quartz. But her role in HHS does have sexual health and youth advocates concerned. As Debra Hauser, president of Advocates for Youth, said in an email statement:

Valerie Huber has a long history of defending programs that misrepresent the facts and mislead young people across the country. Abstinence-only education programs like those she supports dehumanize students, sometimes comparing sexually active students to “chewed gum.” Now she has a role in overseeing the Teen Pregnancy Prevention Program, of which she finds no value.

To that last point, Huber wrote an op-ed for The Hill in April that derided President Barack Obama's efforts to promote comprehensive sex education. She claimed, erroneously, that the Teen Prevention Pregnancy Program, which she will now oversee, promoted sex rather than sexual health, which "harmed" students. But it's an ironic assertion coming from a person who has spent her career peddling ineffective and outdated abstinence-only ideology based on morality rather than science.

According to NPR, abstinence-only programs may contribute to Texas' high rates of unintended teenage pregnancy — a correlation discovered in a study published in the journal Obstetrics & Gynecology recently. Research released by the Guttmacher Institute had also found that abstinence-only sex education programs were not effective in delaying sexual activity among teenagers. This was a conclusion confirmed by the National Institutes of Health (NIH) in 2011.

Instead, students who are taught to "wait until marriage" are more exposed to pregnancy and STDs than those who've received comprehensive sex education. Students who've received abstinence-only education are less likely to know how to protect themselves if and when they find themselves having sex, according to the Sexuality Information and Education Council of the United States. In fact, SIECUS found that declining rates of teen pregnancy and HIV infections are more likely due to better access to and use of contraception, and not less sex.

Giving Huber a role at HHS gives her tremendous influence over what type of sex ed is taught in school. And that could only mean students would be harmed by her position of power.